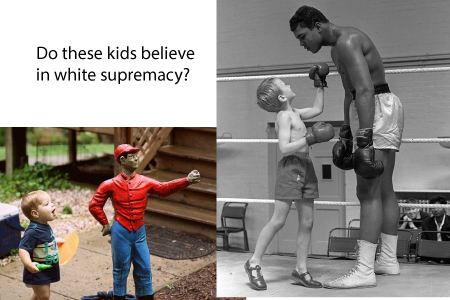 Before The Great Awakening of the early 20th century, when gambling was out of favor and the collective memory of thoroughbred racing's "blackness" was lost, horse racing was America's only popular national sport and that the greatest jockeys were all African-American.
No Responses
Reading Time: 5 minutes
For MLK day: read my screenplay about a slave who became a master – of thoroughbred racing 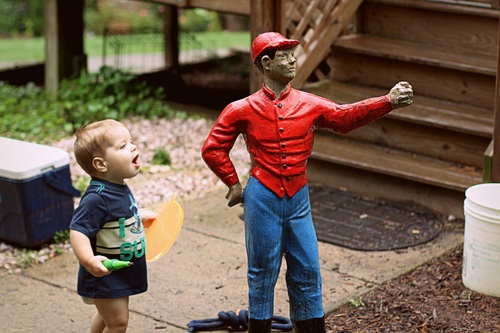 For MLK day, I want to share a bit of American History with you in the form of a screenplay I wrote about Edward Dudley Brown, who was born 1850 into slavery, then won the Belmont Stakes as a jockey, trained multiple Kentucky Derby winners during Reconstruction, and even had his own stable’s horses run in the Sport of Kings during one of the times of greatest racial terrorism this country has known.

Many people don’t know that before The Great Awakening of the early 20th century, when gambling was out of favor and the collective memory of thoroughbred racing’s “blackness” was lost, horse racing was America’s only popular national sport and that the greatest jockeys were all African-American.

The lawn jockey is sometimes interpreted as racial lampooning and there are many versions that are indeed quite offensive, but the truth is that for this nation in the 1800s, there was no bigger sport or interest than horse racing. The degree of fan worship would be analogous to this kid’s thrill of meeting Muhammad Ali: 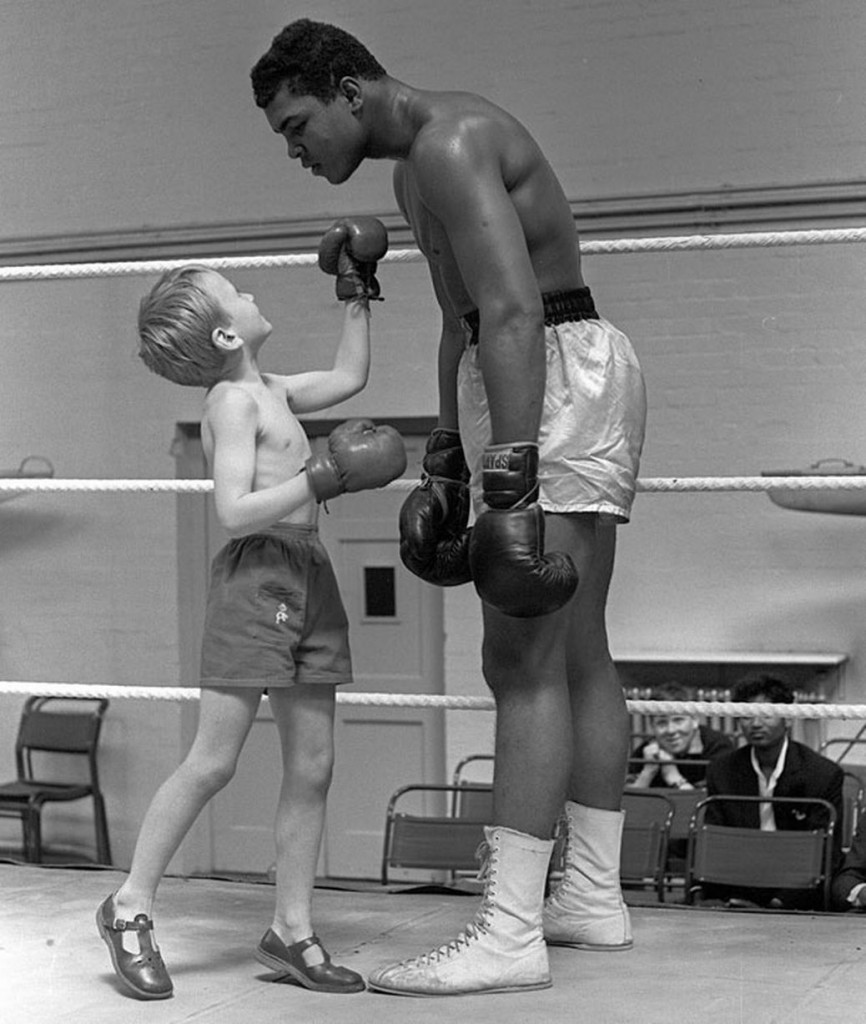 It was not that white trainers and owners preferred blacks-quite the contrary. But like like professional sports owners in the 20th century, they wanted to win and who could argue with the superior abilities of Isaac Murphy, for example, who finished first 34% of his 1,538 races, a feat which will never again be attained.

After Isaac Burns Murphy was featured in the newspaper posing after a celebratory clam bake with the well-healed men of the era, it is believed he was poisoned, then smeared, and his health never returned. 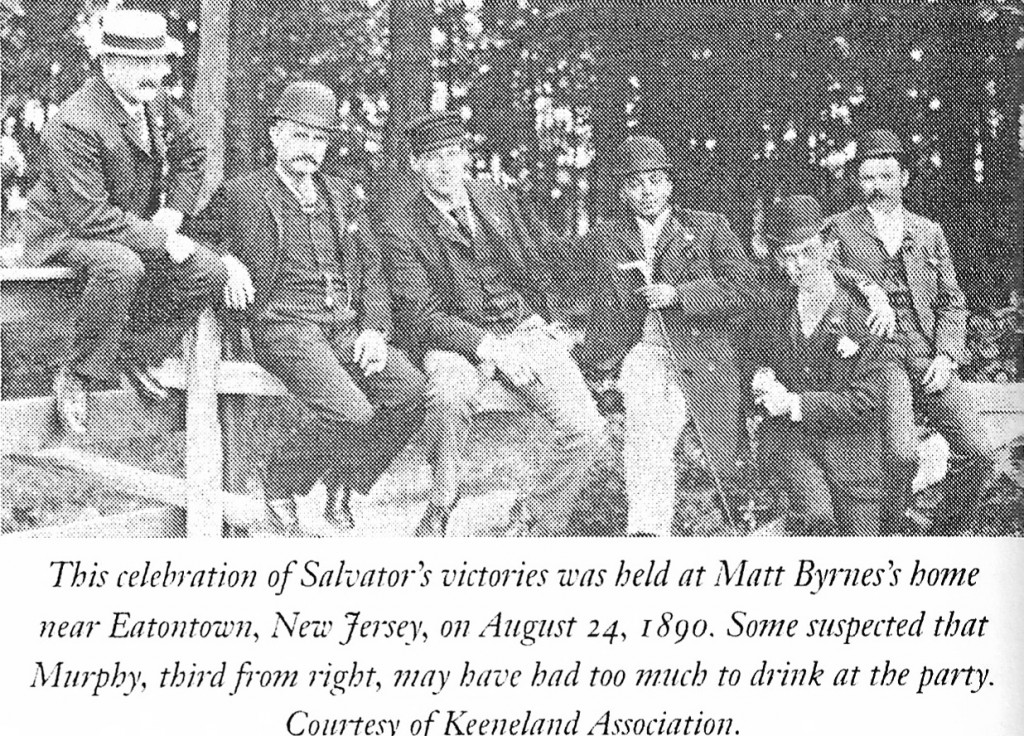 My screenplay, which you can download here, weaves this story and other real-life tales of The Underground Railroad, the ascendance of the KKK, and other scandals into this highly personal story about family, “racial purity”, and horse racing as a prism for understanding institutionalized racism in America.  (I would love notes about the work if you are inclined to provide them.)

I fully expect someone else to write a screenplay or novel about Ed Brown, which is fine and the way the 100th Monkey (and plagiarism) works.  But what you won’t hopefully find in their story is the totally fabricated relationship I created of having Robert Alexander, the founder of Kentucky horse breeding and racing’s systematic breeding practices in America, be the illegitimate father of Ed Brown.

The central challenge of the story is to empathize as to why Alexander could favor and yet reject his own biological son.  It was because the society and your own brother would murder you and the boy for recognizing the genius, courage, and legitimacy or his birthright.

The story explores Brown’s own ambivalence about raising his racist white uncle’s own half-black son as his own and answers the question of what makes a father versus a stud. 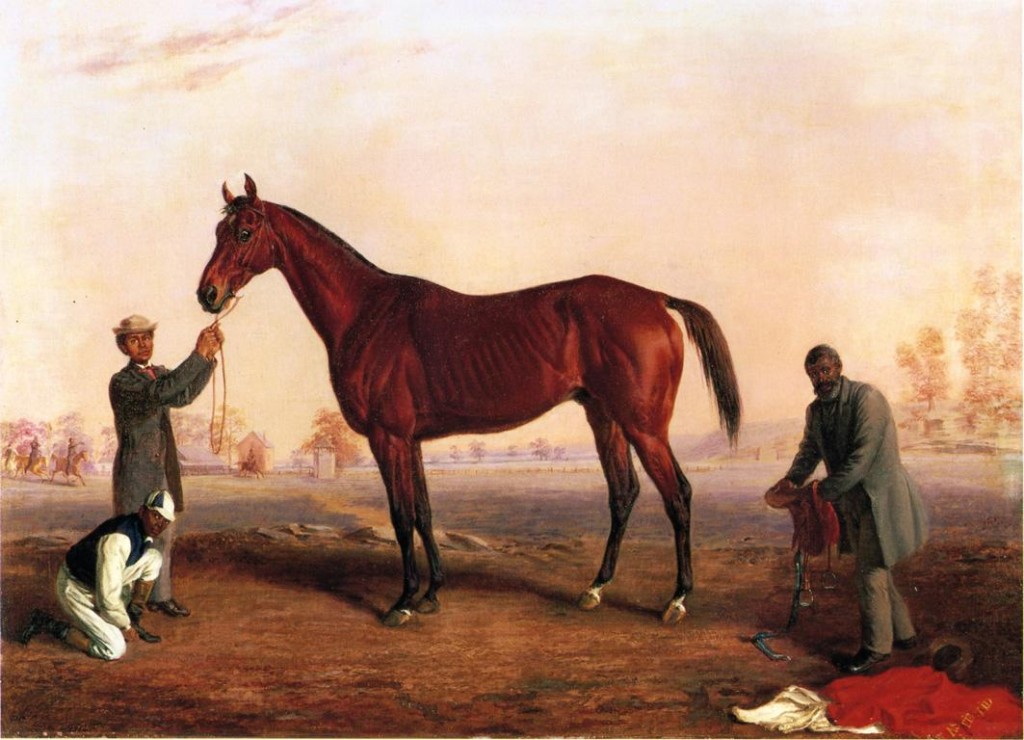 Consider this famous painting by Edward Troye showing Ed Brown and his friend/horse Asteroid.  What you see is the second version of the painting featuring bandits in the background, who stole the undefeated Asteroid, the nation’s best horse and the central focus of a national rivalry with his half-brother, Kentucky, owned by Yankee horsemen, Travers, Jerome, and Belmont.

What you shouldn’t find in another other rendition of the story is the fact that Ansel, Ed’s mentor is joined by an anonymous groom in a straw hat, who I portray as one of Ansel’s own illegitimate sons.  The reason the horse’s embroidered clothes are on the ground is that after that first raid, it is known that Edward intentionally kept Asteroid safe by not putting his own clothes on him.

Just so, Robert Alexander, who in my story loved only one woman, a slave who was Ed’s mother, attempted to protect Ed by teaching him horse breeding, training, reading, literature, and history….but the only way he could protect him was by denying his true name of Alexander.

Edward Dudley Brown chose his name, he chose Edward for the painter, Edward Troye, who lived with them on Alexander’s farm, Dudley for a fictitious deacon I created who filtered Edward’s winnings through a microlending savings and loan to white and black poor folks, and Brown for “The Brown Dick” which was Ansel’s famous horse and the moniker that Ed wend by until he grew into a man and trainer.

When we think of naming, paternity, authenticity, and the shedding of slave names, we think of men like Malcom Little  (Malcolm X), Lew Alcindor (Kareem Abdul Jabbar), and Cassius Clay (Muhammad Ali).  Their conscious identifications highlight just how the doctrine of racial inferiority and slave naming has created a degeneration of the American soul.  To deny one’s own progeny and paternity out of fear is to also live as a slave.  But as our protagonist learns through his own journey through a very dangerous time, ultimately, each person is the jockey of his own soul and although breeding, naming, and training are important, ultimately, we are all charged with riding our own races.  Here is the scene in which a very suspicious 7yo Ed meets his biological father, horseman Robert Alexander, who has paid a king’s ransom to own the lad: 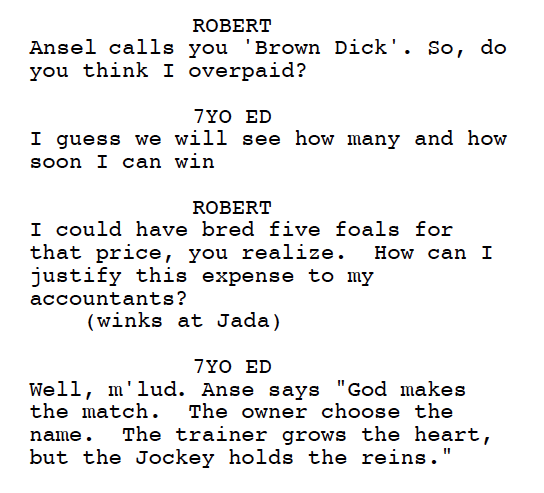 Anyway, happy MLK Day and remember what heavyweight champion boxer, Jack Johnson (who makes a cameo in my screenplay) said about dealing with GreatWhiteHopism in the face of his clear boxing superiority: “The best way to deal with racism is to pretend that it doesn’t exist”.  To understand racism in this country, I encourage you to see Ken Burns’ amazing documentary about the heavyweight fighter, “Unforgivable Blackness”

It may seem naive at first but in the long term, what we resist, persists… and like every struggle, our self-identification and feelings of superiority/inferiority/victimhood/entitlement are part of the problem, not the solution.