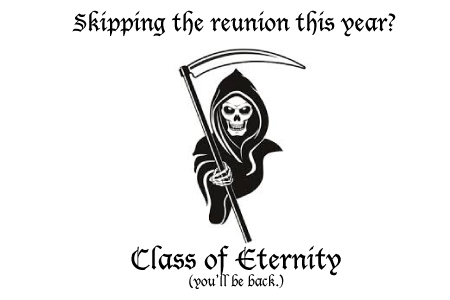 No Responses
Reading Time: 3 minutes
High School Reunions- what are they good for?

I attended my 30th high school reunion yesterday and took some pictures of the classes before and after us.

THE FIVE TRUISMS OF THE SEMIOTICS OF AGING

1) Cohorts of people generally look older as they grow older.

Can you spot the youngest to oldest? 2) People are generally aware, but not fond of, truism #1

Hence the numerous references to people looking good “for their age”, and botox/fillers,  and musings about how one feels 48…

3) Nobody really believes there is a cure

Otherwise, why wouldn’t everyone be taking it (see truism #5).

Also see this blog for an explanation of the sourcing heuristic.

This generalized lack of hope presents itself in the form of occasional  ‘gallows humor’ although so many of us have lost parents by now and tend to dislike “whistling past graveyards.” My friend, who is a scientific writer, said in response to my statement “I have found a cure for aging but nobody believes it.” “I don’t believe it.”

See this blog for further discussion of skepticism.  That is why I really don’t like to discuss in great detail what I do.  It’s kind of like Bruce Wayne getting into a discussion how he knows the Police Commissioner’s daughter.

Because there is no deep-pocket interest backing telomerase activation via a US-patented, non-patentable natural molecule, the powers-that-be may shut down such endeavors without ever having the chance to prove its validity. See my blog posting on recent FTC interest in TA-65.

When thinking about life, I realize now how important to be in the fractal moment and feel the pain and truth that your particular phase of life is attempting to bestow upon you.

I had a brief but poignant discussion with two young ladies from the class of 2000 and one of them mentioned feeling relatively less intelligent and affluent than her peers, which caused her to feel alienated throughout her high school phase of life. We agreed that such feelings of inadequacy are typical of adolescents (and adolescence) in general.  There exists some zero-sum delusion informing our feelings of inadequacy and that only the ‘tincture of time’ reveals as a mere byproduct of learning to fly while our landing bones were still forming.

When I think of things that interested my friends at this past 12 months’ 30th high school and 25th college reunions, I realized that our late 40s phase of life is a very fragile yet rich one.   It is beautiful to see the patina of humility upon us as so many of us have both softened and grown tougher in response to life’s tempering.  We have buried parents, endured failed relationships and career detours, and even wrought tears of shame in our own children.  Yet somehow the grace of the universe never fails and the infernal banging and burning just forges something purer and more eternal from our souls.

Maybe it’s a good thing that isn’t any “Botox for the soul” although that would be a pretty good functional description of how adaptogens work.