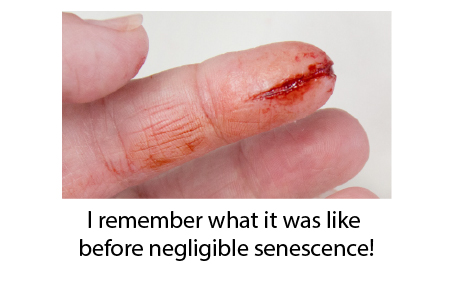 Yesterday, I was rushing through a shipping task and clumsily sliced open my ring finger to about a 1.5mm depth. Predictably, blood came gushing out...
No Responses
Reading Time: 3 minutes
I cut my finger – and it triggered a past life remembrance

Yesterday, I was rushing through a shipping task and clumsily sliced open my ring finger to about a 1.5mm depth. Predictably, blood came gushing out and so I put some alcohol in it and wrapped it up with micropore tape. 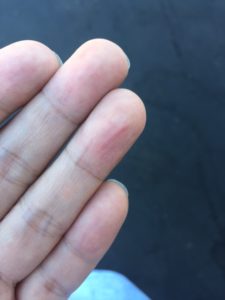 Less than 24 hrs later, after doing yoga handstands on it and taking 3 capsules of containing Recharge, I un-bandaged the finger to find this:

It seemed odd because I remember what a finger laceration used to entail. There would be disunion, a scab that would form, and perhaps days to weeks of a remodeling and weakened scar. I can’t help but think that accelerated local stem cell replication helps healing, perhaps because telomere restoration is a potential rate-limiting-step in healing.

Interestingly, when you do fetal surgery, the baby is usually born without scarring. I would guess that the lack of bacteria, mechanical stress, and anti-inflammatory cytokines help. But could it also be that the quality of the local and progenitor stem cells is higher and that this efficiency represents not only a lack of differentiation but a paucity of epigenetic and genetic commitment and its attendant inflexibility?

Many clients taking adaptogens report rapid healing but I would like to compare and contrast with an email I received from a patient this week who was going to quit TA-65 because he had muscle aches and a sore Achilles’ ligament:

I took 8 daily for 2 weeks and experienced negative symptoms including a variety of muscle stiffness issues and also I developed Achilles pain in the
same time.

I had a similar loss of faith and some faulty attribution with my own Achilles’ years ago and I blogged about it here.

To learn more about Achilles’ ligament injuries, watch this podcast that I did.

In a nutshell, I thought the TA-65 was causing the problem but stopping made it worse and doubling my dose made it go away. So how can I reconcile that? Well, my patient and I both felt there was a relationship but we failed to see what was underlying- the injury to the tendon.

Because the tendon was injured, the inflammation, repair, and mechanical compromise were heightened. Instead of being a fixed constant, the acceleration of repair also left the ligament prone to re-injury. Sort of like not waiting for concrete to dry before walking on it.

Interestingly, I often find that muscle and tendon soreness in the first two weeks of starting an adaptogen a very auspicious sign in my patients. The majority of people correctly recall an old injury and they report that the pain resulted in a new normal of no pain after a few days – in other words, old scars were being remodeled and younger, better cells and connective tissue were being laid down.

So a word to the wise: pain is not weakness leaving the body. It is a sign that there is inflammation and something that is easily reinjured if you don’t pay heed. Adaptogens can’t change the physics of movement or repair but I believe they can accelerate the normal processes; but you can’t walk on wet concrete and not expect to leave some footprints. Watch this video on sports injury for more info: 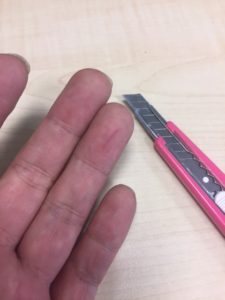 ADDENDUM- This is my 1.5mm finger laceration at 48 hrs. I don’t remember this healing  taking place as quickly in pre-adaptogen life. (disclaimer- the featured image is obviously a different person and finger but Doug Malewicki asked me about it so I wanted to clarify. I didn’t have the foresight to take a “before” picture).