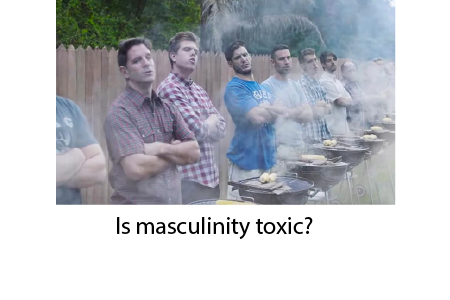 This week, the American Psychological Association and the Gillette company declared war on “toxic masculinity”. This commercial, a kind of public service announcement aimed at men, ended up making a lot of people, mostly men, angry:

I quote from this article:

According to the APA, “traditional masculinity ideology” helps limit “males’ psychological development, constrain their behavior, result in gender role strain and gender role conflict, and negatively influence mental and physical health.” According to the APA, “traditionally masculine” men have built a system of masculinity around bullying rather than civilizing, around stolidity rather than emotional maturity. Thus, it is the fault of men that young boys are growing up to become toxic males.

So the question is, why were people so angry at some constructive and positive aspirational notions with a strong basis in fact?

This is not a rhetorical question. I will explain why people were mad. And it should be obvious to you unless you are totally gullible to the current vogue of leftist thought known as “intersectionality” that I describe here.

If you replace the word masculinity and insert any other descriptor, like femininity, heterosexuality, blackness, whiteness, you realize that it is offensive. Not all men need to be reminded of the need to behave well any more than other groups need to be reminded to not behave in the worst ways that are associated with them.

The current fad to target the perceived holders of power, the cis-gendered affluent, heterosexual, white male, has emboldened a conversation around the intersectionality of victimhood.

To put it simply, the current culture war suggests that history is a dialectic between the relatively powerless, who are, by definition, inherently incapable of being racist, sexist, and bigoted, and the perpetrators of injustice.

I personally don’t believe life is that simple. As Jordan Peterson says, women and men have always been allies. Don’t let the idea merchants divide and conquer us. I may be a Korean-American, Harvard-educated writer but I still consider NY Times editor Sarah Jeong’s tweet to be bigoted:

“Oh man it’s kind of sick how much joy I get out of being cruel to old white men.”

Ageist, sexist, and racist. Just apologize or say you were mostly kidding, Sarah. Instead, she doubled down and her supporters rallied. This is not the path to a better humanity. I can condemn Rep. Steve King’s bigotry and also condemn Sarah Jeong.

We are all one human family. None of us are perfect. Let’s aspire to create a society that recognizes virtue and inclusion. The path to transcending bigotry is not with an endless redress of grievances.

3 thoughts on “Is Toxic Masculinity a thing?”