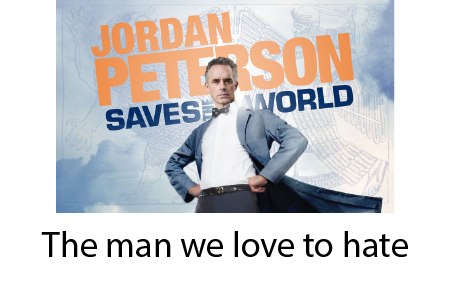 If you ask Jordan Peterson what fuels his popularity and mission, he clearly states that it is to help people find their responsibilities and the courage to serve.
6 Responses
Reading Time: 3 minutes
Jordan Peterson – prophet of kuleana

If you have access to social media, the name Jordan Peterson has probably come up. For those who have prejudged him, I offer a very interesting video clip below.

By way of introduction, Professor Peterson rose to prominence for opposing a Canadian law mandating use of alternative gender pronouns. He said this compelled speech was unjust and unprecedented. This led to a larger discussion about the social justice movement of the ideological left and what he feels are the corrosive dangers of that movement.

By way of context, some have labelled him as an “alt-right” instigator of regressive politics. Others have found him to be a voice of sanity and individual liberty and enlightenment.

Before you watch the video, I want to discuss a conversation I had today with two coworkers who was complaining about their kids and millennials in general. They noticed that they are believe young people are filled with a sense of entitlement but have no notion of responsibility. Not that it matters, but they were women. The same conclusion was mentioned two days ago during a conversation with a man at Christmas dinner.

Where did this sense of entitlement come from? Was it the participation trophies for youth sports? Was it the idea that there is no right and wrong and that what you feel justifies your outrage and fuels your politics?

Certainly, I am not advocating shaming anyone for their beliefs and their identities but there is a lot to be said for listening to this very intellectual and honest champion of what he believes to be historical and humanistic values.

As a student of history myself, I find myself mostly agreeing with Peterson. Western civilization at the moment is the very best of times. Much of the world is more tyrannical and for most of history, living conditions were such that life was much much worse as I blogged about here.

It is not that he doesn’t acknowledge male dominance; he merely states that there are many other ways to understand and view history aside from the notion that one group of humans sought to oppress another based on gender.

In the interview, the woman, who is a feminist author, manages to hold her ground against the cantankerous and rather agile Peterson. In most interviews, the attempts to attack and discredit are rather soundly rebuffed by a very clever orator with a strong sense of passion in his beliefs.

I think the zeitgeist, or sign of the times, is the apotheosis of a guy who merely states that he thinks gender is biologically determined and that people have the most to gain from thinking about their responsibilities rather than their rights.

Everywhere we turn, there is another victims rights group popping up and another absurd self-identification claim. Now people can choose to identify as a different age.

Read this blog if you don’t believe me; some men have decided that their inability to find sexual partners constitutes a human rights violation and have called themselves “incels” or involuntary celibates as you can read about in this blog. Ironically, the term was invented by a woman.

In the Hawaiian culture, the word for rights is also the word for responsibilities: kuleana. This more balanced understanding of human relations highlights the fact that relationships are reciprocal. You cannot have only rights or you end up with fragile, narcissistic, and unjust crybabies.

If you ask Jordan Peterson what fuels his popularity and mission, he clearly states that it is to help people find their responsibilities and the courage to serve. That is a message with resonance that transcends the selfish and entitled victim culture of the vociferous left.

I fear that he may be right about the decline in participation by men in the social sciences. If you already start with the axiomatic narrative that “toxic masculinity” is a valid prism to begin any conversation, then you have encouraged people to not hold true in their own power and to repress any open discourse about how other factors and narratives may be at play.

Well, here is the clip. Note where the interviewer falls into a trap of thinking Peterson is calling all women ungrateful. It evokes both a cringe and a chuckle.

If you want to hear what the man says drives is work, skip to 26 minutes, where he clearly articulates that people are at their best when they are serving other and living up to their responsibilities. This is a message that goes against the individualistic and self-righteous rhetoric of the entitled fascist left and appears to have deep resonance.