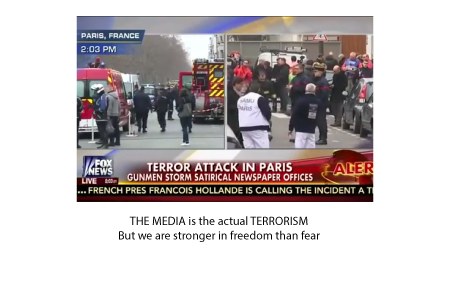 These murdered in Paris are to be remembered but it should not be a lever for an institutional change in civil liberty and national sovereignty. That would be like forcing everyone to take trains because of an airline crash staged by Amtrak
4 Responses
Reading Time: 6 minutes
Life imitates art in Paris – just as Blofeld planned? ART: Recently, I blogged about how the new James Bond film featured a staged terrorist attack in South Africa soon after they were the sole dissenting “no” vote against a global security initiative known as “nine eyes” and the CNS.  The totem animal, the octopus of Spectre, has nine brains and the CNS is also an acronym for the Strong Cities Network (SCN) that we have already apparently joined.

REAL LIFE: The Strong Cities Network is a US Justice Department concession a global police force, presumably targeting Islamic extremism, the latest boogieman that the intelligence apparatus has conjured. What is odd is that the SCN will be run by a private contractor, the Institute for Strategic Dialogue. What our Attorney General and world mayors are saying is that cities will now cede their sovereign and local police and intelligence functions to “blue helmet” international forces which are directed by a private consultancy firm.

What the heck? It would seem that this sort of thing should be presented to the American people before ratification but amidst the hysteria generated from CNN, with calls for more surveillance, fewer guns, and a subrosa Islamophobia, it would seem that the nation is already on board.  Did you know that Vatican City, London, and Washington D.C. are already autonomous bodies that are not beholden to their host nations?

There is a false presumption of benevolence that we place in our parents when we discover that they lied about the boogie man, Santa Claus seeing everything that we did wrong, and perhaps all the other metaphysical threats and delights that the patriarchal deity has in store for us.

Tonight, as we hear of all the murdered in Paris, I wish to urge that we remember what the brilliant professor Paul Bloom told us in his lectures at the Renaissance Weekend that I attended: empathy is bad.   Here is an excerpt from an interesting article on the subject:

Bloom, respectfully, disagrees. If anything, we need less empathy, not more. Empathy leads us astray. It causes us to pay special attention to what one might call narrative suffering (highly visible, attractive victims that we feel have some kind of relation to us), and thereby to ignore statistical suffering (faceless victims to whom we are not connected). We squander our attention on Baby Jessica who fell into a well (Bloom’s prime example), while ignoring all of the yet-to-exist babies who will be born into the eco-apocalypse caused by our reckless global warming. We generously donate time and money to the victims of spectacular catastrophes even when more time and money isn’t particularly helpful—as with the 2004 tsunami, a disaster for which Doctors Without Borders stopped accepting money, pleading instead for donations to less media-friendly crises. Meanwhile, we stingily withhold resources that could make critical differences for the vast population suffering from the invisible, slow tortures of poverty, violence, and disease.

Empathy for the Jew, homosexual, dissident, and gypsy were psychopathologically absent during the Nazi genocides because of the empathy felt for the emerging superior Aryan race. Some pundits predict empathy may transform to hostility for anyone in traditional Islamic garb in Europe now. I disagree. When we were visiting in August, our tour guide told us a that a Neo-Nazi urinating on refugee children triggered massive and broad support for welcoming more refugees. She was a very articulate East German medical student and was raising support for the new asylum seekers.

This perhaps over-empathic response to the actions of a single drunkard show just how easy a populace can be swayed in a nation forced from the aftermath of unbridled fascism; it was something that my children were lucky to have heard first hand.

But let us return to Professor Bloom’s point. Whether your red-blooded heart believes that one French or American life is worth a hundred Muslims, these are the statistics: The death toll in the Syria Civil War, which the Russians, US, Saudi’s, Iranians, and possibly the Israelis also have proxy agents fighting, now exceeds 210,000.  Those people are fleeing to Europe because of the terrorism of war at home that we are actively helping to foment.

In the minds of scared and confused Americans, the Iraq and Afghan wars were somehow to avenge 9/11 although there is no link.  Contrary to what Ahmed Chalabi and Colin Powell said, Saddam Hussein had no weapons of mass destruction other than the ones that American companies sold to them for the Iran-Iraq war and keeping that secret directly injured US soldiers who were exposed to them. Of course, we have some empathy for our soldiers who did and witnessed horrible things and a “thank you for your service” or a free dinner just doesn’t adequately compensate these people. When I met marine corp Captain, PepsiCo exec, and American Battle War Monuments Commissioner, Maura Sullivan, at the Renaissance Weekend, she had just been named to Assistant Secretary at the VA.  It appears that now she has been promoted to Ash Carter’s Assistant for Public Affairs. I emailed her to have Veteran’s stories be a tool to prevent further war but perhaps the idea of veterans promoting peace is not one that has legs in the VA.

Ms. Sullivan struck me as a person of high morals, integrity, and talent and I trust she will serve our nation well.

Back to the point of the blog, the death toll for Iraqis since our intervention is 500,000.  Surely, the destabilization of the enemies of the Saudi Arabia/Israeli power axis in Iraq, Afghanistan, and now Yemen (2,300 dead) and Syria might have something to do with the rise of the so-called ISIS?

Whether there are agents in ISIS, Al-Qaeda, or the Pentagon who bear multiple allegiances the CIA, MI-5, Spetznaz, the Mossad, Tehran, or the Duchy of Grand Fenwick is not the issue. Who is responsible for the Paris attacks is also not the issue.  The real issue is whether fascism, loss of freedom, and xenophobia will be purchased with such a relatively low investment of capital.

After Charlie Hebdo attacks, Jews were targeted in Denmark, the nation rallied to protect them despite Netanyahu’s cry for them to move to the safety of Israel.  In fact, the Danes had a history of paying off the concentration camp operators in exchange for the lives of Danish Jews who were protected and repatriated.  Those that were helped to flee to Sweden during the Nazi occupation even received their lands and businesses after returning from Sweden by their Danish brothers, which is a lot better than Japanese-Americans got from their own nation.

There is a better strategic response to whomever staged these attacks in Paris than fear and xenophobia. Whether it was 100% ISIS or some other fraction is not the issue. The game is lost when we, the people, refuse to play along. The proper response is to become more inviting to fellow victims of extremism fleeing their war-torn lands.

It all reminds me of one of my favorite Ricki Lee Jones lyrics from Juke Box Fury:

These murdered in Paris are to be remembered but it should not be used as a lever for an institutional change in civil liberty and national sovereignty. That would be like forcing everyone to take trains because of an airline crash staged by Amtrak. It would be like buying the ticket to the aforementioned circus and then loading up on snake oil as well.  (I was appalled by the CNN talking heads tonight broadly proclaiming a need to seize American guns to stop the same thing from happening in our country.) I believe that the issue of who perpetrated these murders is less unimportant than a redoubled effort to examine the root causes of extremism- that of fear mongering and war for profit and power. To an unemployed former Iraqi, now ISIL solider, who has known murder his whole life, it is unimportant who calls the shots; he cares only to be paid in dollars (or virgins in the afterlife.)

P.S.  If you want to take Professor Bloom’s mistrust of empathy to heart, why not look at the number one terrorist threat to us all, namely the War of Aging that we all face?

That is why the full title of of my book is Telomere Timebombs: Defusing the Terror of Aging.

So where is the outcry for the death toll from the scourge aging and disease that could be prevented with telomerase activation research? Here is where your greatest empathy bang for your buck belongs: