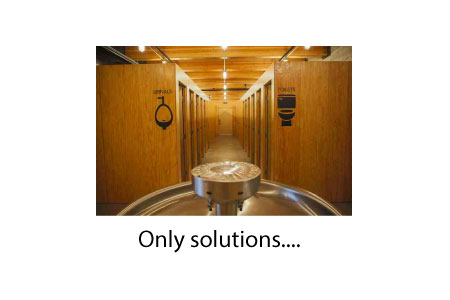 I have no way of knowing if this blog will surprise 40%, 20% or just 10% of people but I KNOW it isn’t above 50% because all you ladies know EXACTLY what I’ll be blogging about… If you are easily offended, I would just skip it altogether!

I had a comical epiphany last summer at a 3-day music festival called Outside Lands in Golden Gate Park waiting to use a Porta Potty.  I asked a woman how she could tolerate the messiness of the facilities and she said with a sly smile “I just won’t stand for it!”

I reluctantly asked: “You mean…?” She proclaimed a bit too proudly (and it might have been the beer talking)  “I just don’t sit down!”

Now I’m not suggesting that all women don’t take the time to clean up the facility before using it or that they don’t actually choose to sit down to void, but my intuition says there may be an association between this travesty of group hygiene and another type of feminine mystique…

That’s right, guys.  Just because you ARE to blame for the mess at home and you don’t always lift the seat there, don’t let the ‘crop-dusting sex’ frame us for this one! Imagine the libations of tens of thousands of women without the benefit of a precision aiming apparatus or the usual proximity and you have might now have the same epiphany that I did…

The key to decoding the mystery of the messy Porta Potty was that a women of sound mind, otherwise moral and considerate in her daily life, might not choose clean up the mess of thousands of people before sitting down and wouldn’t feel responsible for cleaning up after either.   I never thought to give any of these women a dirty look after seeing the mess in the Porta Potty that they had left for me! In fact, with my limited perspective, I genuinely felt sorry for them having to sit on that mess thinking, “man, men are just pigs!”  How ironic ’tis that misplaced sympathy now!!

Enough said? Perhaps too much?

We know that 85+% of cancers express telomerase, we know TA-65 increases telomerase activity, therefore we allow ourselves to believe that telomerase activation causes cancer.  But this is not what the data or logic would suggest.  In the landmark 2010 paper by Willeit et al in The Journal of the American Medical Assn, researches following 787 Italians (of whom 12% developed cancer) found that the shortest telomeres (measured in white blood cells) was associated with the highest incidence and mortality.

There are two keys to understanding why 2+2 doesn’t make 22 in this mystery of the cancer-associated telomerase.

The first is that as the CANCER STEM CELL HYPOTHESIS suggests, most cancer arise in stem cells and since stem cells already possess telomerase activity, its is a RETAINED characteristic, not a de novo one. Telomerase activity is a necessary, but not a sufficient or even causal precondition for cancer.

The second key is shown in my own double cancer pyramid paradigm showing that telomere erosion in stem cells is the root cause of most mutations leading to cancer.  The second most effective cancer prevention is by the p53 “watchman of the genome”. And there is a lot excitement about cancer immunotherapy, or tertiary prevention in my schema, in the wake of President Jimmy Carter’s non-wake. He had metastatic melanoma to his brain which his own cytotoxic t-cells cleared out after the trickster apoptosis signal was blocked. All the “new therapies” are allowing us to do is use our own immune system to cure cancer. Sadly, traditional cancer therapy as shown in the inverted pyramid above ground, generally raises the likelihood of new cancer and degrades our immune system.  In my practice, we measure CD28negative CD8 (cytotoxic T-cells) and that allows us to infer how much reserve you have left.

I was asked a couple of nights ago by a neurosurgeon why taking TA-65 could have been associated with a case of resolution of brain cancer but not of the prostate cancer that my patient eventually succumbed to.  It is possible that the prostate cancer is a more normal variant and in fact autopsy studies show that in men who die of accidents prostate cancer can occur in our 20s, suggesting that we may be getting and curing ourselves of cancer many times and that is only host factors such as declining immunity that make the difference.

(N.B.) The concept that a person could be making and destroying cancer at high baseline rates is simply anathema to my dogmatic colleagues. See this video I did about a new highly sensitive cancer ‘screening’ test for more info.

If you don’t believe my double pyramid paradigm, just consider this serious and reputable scientists from Scripps and NYU published yesterday (May26th, 2016). This study found that mutations in both the proteins involved in telomere protection, POT1, and p53 (our watchman), are associated with the most large and aggressive forms of cancer.  Those are the bottom two levels, or the primary and secondary prevention of cancer of my paradigm. Ladies (and gentlemen)…don’t kill the messenger if I point the finger of culpability where it squarely lies – women (and men) who can’t be bothered and telomeres that aren’t being protected.

Whether it be decoding aging and cancer or keeping clean toilets, let’s start with first principles that pass the test of logic, theory, intuition, and evidence, and then act.  To understand my theories about aging and disease, read my book, Telomere Timebombs: Defusing the Terror of Aging.