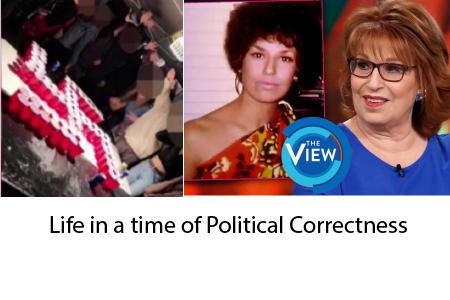 As our language and culture evolve, the Orwellian transformation of language hides the rich provenance of phrases like “Political Correctness”. In order to explain the concept to an alien or artificial intelligence, you would face insurmountable problems.

The problem with political correctness is that politics, by its very nature, implies preferences that are subjective, hard to change, and somewhat delusional. If we are to believe the Wikipedia entry as it currently reads, the Nazi’s were amongst the first to use the term as reported in the 1934 New York Times:

The New York Times reported that Nazi Germany was granting reporting permits “only to pure ‘Aryans’ whose opinions are politically correct.

When we look at the authoritarian Communist regimes of 20th Century, we find that self-criticism and the persecution of thought crimes were common. Whether it be Stalin’s reeducation, Mao’s Cultural Revolution, or Pol Pot’s Cambodia, those who were regressive and had ties to colonialism, capitalism, classism, religiosity, or academia were often turned in by children and neighbors and forced to be reeducated out of political incorrectness. In today’s parlance, the phrase has a dual connotation. It’s public persona is that of a progressive thought regime that has gone overboard. That is why comedians like Mel Brooks, decry it’s role in killing comedy.

But if we look at the compassionate and internalized value of political correctness, the issue becomes much more complex. Imagine if a non-Jew or someone in a self-proclaimed White Nationalist group had made The Producers, with its playful handling of Adolf Hitler and rather cynical premise of producers trying to make an offensive and horrible Broadway flop and having that backfire for profit. AI and aliens wouldn’t really understand the problem but we, as heart-centered humans, understand this political incorrectness. The virtuous “PC” ethic is a fundamental element of identity, authenticity, and privilege earned from victimhood and not to be abused by the insensitive. This past weekend, in my neighborhood, some teenagers playing beer pong attempted to be funny by posting red solo cups in the shape of a swastika and doing the Nazi salute. This drinking game went viral and the spin was not that they were joking, like Mel Brooks, but that it represented a deep-seeded anti-Semitism and represented a resurgence of an old evil.

Now I am not trying to defend their poor judgement and I am not even denying the premise that this community has problems with bigotry. I would submit that these uninformed and unsophisticated teenagers, intoxicated on beer, thought is was funny and would probably not count themselves as literal supporters of Naziism.

Of course it is politically incorrect. But it is morally right to also consider who is doing the kidding and criticizing and with what intentions?

Blackface arose from minstrel shows and its cultural significance is not simply one of hatred as those that want the Virginia governor to step down would believe. I find it interesting these lions of the cultural left who have performed in blackface in the past are not subject to the same political correctness attacks: Joy Behar, Ted Danson, Dan Aykroyd, Jimmy Kimmel, Jimmy Fallon, Billy Crystal, Sarah Silverman, Tom Hanks, and Robert Downey Jr. Those are adults who, by virtue of protection by the mainstream culture, are given a complete bye in their use of blackface in comedy. Mel Brooks gets zero flak for his anti-Jewish and pro-Hitler movie and musical. You and I understand why and it seems fair and well, “politically correct”, for want of a better term.

To me, the most frightening aspect of this latest debacle at our local high school is not actually the permissive and bigoted culture that has been exposed. We knew that was here. The more frightening aspect is the condemnation from the young people who, knowing full well what jackasses without deep malice their classmates are, are giving speeches and decrying them, to the delight of the national media and those that would weaponize identity politics.

True Naziism was not about destroying one group of people as the ADL would have you believe; it was an amphetamine-driven mystical jingoistic delusion that used thought control and fear of dissent to seize power domestically, and then internationally…but it always started with the children, or Hitler Youth. National socialism was built upon people who loved justice, sought to build a utopia, and saw nothing wrong with curtailing free speech and thought. It frightens me that this idea of changing our Constitution is being driven by young voices who want to abolish the electoral college, and the Bill of Rights where it pertains to free speech, the right to bear arms, and a right to privacy and freedom from illegal surveillance.

Imagine a social media posting of Jewish comedians playing beer pong around a red solo cup swastika and doing the Nazi salute and you and I “get” the joke and no crisis management is required. This is not a thought experiment; this is the reality of living in a complex and nuanced world. So Mel Brooks really can’t have it both ways when he criticizes political correctness and yet is the beneficiary of it. If I have one drop of Ashkenazi blood, as my 23 and me test says I do, then can I make anti-Jewish jokes? Of course not.

Who amongst us, in the age of constant surveillance, is without thought crime or politically incorrect speech? Perhaps we need to think about a right to privacy and political incorrectness before everyone is afraid to express themselves, let alone make a joke. In our current surveillance state with young zealots, all company can be considered mixed.

Note: I don’t condone what the Newport students did and the comedians who wore blackface and Mel Brooks don’t need any defense from me. I am merely saying that everything has a context and if you believe there are literal Nazis at this bourgeois high school, you may have used these low-brow high jinks for your own political gain.