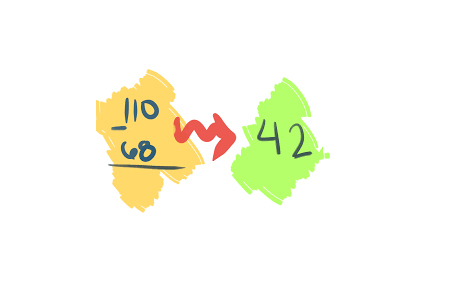 I haven't run or done aerobic exercise throughout my adult life and last week my pulse pressure is just 35mmHg (or that of a 25 yo)
2 Responses
Reading Time: 3 minutes
Pulse pressure and aging

Pulse pressure is the difference between your systolic (pumping) and diastolic (resting) pressures. So if you’re 120/80 then it is 40mm Hg.

As you can see from the Men’s Journal article about physiological aging featuring our trailblazing friend, Dr. Joe Raffaele, the creator of the original Patton Protocol, the pulse pressure tends to increase with age. Why is this?  Well, I believe that the stem cells in your arteries (or the ones providing their replacements) accumulate genetic damage with time. Think of it as being born with the same tires, which over time, lose elasticity. Instead of getting new tires, areas of the rubber are replaced like a patchwork quilt but over time, the arteries get worse at propagating a pulse (contractility) and worse at being stretchy and rebounding (like a balloon that fills then bounces back to expel the pressure forward).

Take for example my friend and patient, 77-yo Doug Malewicki, who invented SkyTran, a mass transit being depolyed in Lagos,  the game Nuclear War, and Robosaurus, the monster-truck that eats and tears apart cars:

His pulse pressure is high because of loss of elasticity from stem cell aging, not because he doesn’t exercise. He is a very avid runner and cyclist as you can see from this trek up Mt. Baldy. It turns out that his heart muscle, like his legs, are very strong muscles and don’t require that pressure storage function that the arteries must retain. His heart pumps so forcefully that his SEVR (or subendocardial viability ratio) indicates a highly conditioned athlete at 218%. But what he dismisses as “white coat hypertension” or the phenomenon of high blood pressure in the doctors office is really a reflection of the loss of elasticity of aging arterial stem cells and the arteries they produce. His radial pulse pressure is older than his stated age at 72mmHg even though he showed me a sheet of values which were normal when taken at home.

In contrast, I haven’t run or done aerobic exercise throughout my adult life and last week my pulse pressure is just 35mmHg (or that of a 25 yo) with an SEVR of 228%. My augmentation pressure (or the pressure that my heart pumps against is just 2mmHg whereas Doug’s is 22mmHg. Now Doug may have better lungs and joints from frequent repair and maintenance but as far as objective cardiovascular function, being a couch potato hasn’t hurt me because I believe that my telomerase activation has kept my stem cells in a youthful state.

To understand more of my hypertension is not a disease but rather a CURE for the problem of poor perfusion due to aging arteries, watch my video on the topic:

If you want to learn more about Doug’s insights into staying fit, download and read his fascinating and fun book, “Fit at 75”