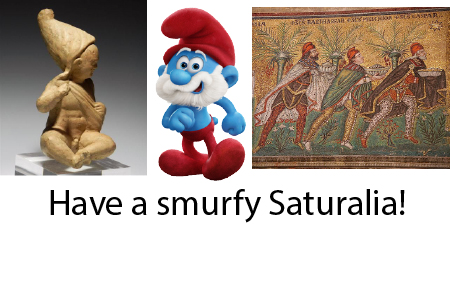 We celebrate a lengthening of daylight, gather with loved ones to worship, and show gratitude with gifts
No Responses
Reading Time: 3 minutes
The origin of the Christmas red cap

Today is Yalda night, the winter solstice celebrated by Persian-influenced cultures as the longest night of the year. That celebration has morphed into what we now celebrate as Christmas although many culture still celebrate Yalda as well.

Two years ago, I explained how the Phyrgian Cap, or red cap, harkens back to a time during the Roman Empire when slavery was common. In this blog, we explain that this red cap was worn by freed slaves to proudly display manumitted status. Only during the week of Saturnalia, people who were still slaves could wear them and pretend to be free and as a sort of social safety valve, the masters had to serve the people wearing the red caps and give them coins.

When my sons and I travelled in the Middle East, we were impressed by the way that newer traditions usurp older ones such as the Church of the Holy Sepulcher in Jerusalem and the Hagia Sofia in Istanbul.

As ancient as people observed the cycles of the seasons and astrology, people came to celebrate the fact that the darkness was being conquered and that from here onward, the days would grow longer. The Roman cult of the emperor was really about loyalty to the system of a larger beliefs that the Roman expire was exceptional, that the system of human slavery worked, and that the feast of Saturn celebrated the status quo by allowing a week of debauchery to hold out the promise of freedom for the enslaved.

What are the parallels with today’s celebration? Arguably the most stable church is the Coptic one out of Egypt and they reportedly used to celebrate the unknown date of Christ’s birth around May 20th until it was changed in the 4th century.

The use of the Roman Catholic date of December 25th to celebrate the Christ’s Mass may have been to dovetail into the existing Saturnalia or Mithras celebrations. Our tree is from a Norse tradition, and the Santa Claus mythology is a pastiche of various traditions that was elevated by the Coca-Cola company and modern retailers and storytellers.

So what? Who cares? Maybe no one. I just thought I would explain that most of what we accept as traditions are actually syncretic in nature and derive from many other traditions. Is is easier to hijack other traditions and rebrand them. Most people are not very curious about provenance; but to me, there is a lot to be learned from spending a little time is asking why things are.

Having said all that, others believe the cap comes from the Greek god, Attis, who was born on Dec 25th of a virgin mother and died and rose from the dead in three days. This worship is also similar with the Persian deity of Mithras and shares similarities with Horus and Jesus.

Is Christmas a tradition from European, Norse, Roman, Greek, Persian, Egyptian, and prehistoric traditions? Probably. Does it matter? Not really. The truths that we celebrate a lengthening of daylight, gather with loved ones to worship, and show gratitude with gifts. Happy Christmas and here’s to a vanquishing of the darkness.

With or without our worship, the days will get longer as we journey towards a part of our yearly orbit with increasing exposure to the sun. But the power of belief that we are linked to astronomy and that our actions may be encouraging favor amidst the divine are still comforting even if we are referring to a God or a man in a red flannel costume. From the day when the sun is lowest in the sky, it begins to rise from this still position (sol-stice) and ascend. How reassuring for all of us that the sun will rise and the days grow longer!  Celebrate what Emperor Aurelian called the Sol Invictus or undefeated sun.

If we can just keep our cells, bodies, and lives falling and rising again then perhaps we can work towards healthier longer lives. Let us celebrate the victory of ourselves over the very notion of continuous decline and ever lengthening darkness!