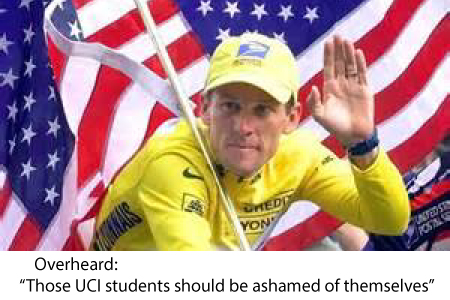 This week, some crazy kids got a Publishers' Clearing House-sized reality check after attempting a "liberal" flag ban; it came in the form of a veto, a media storm, and a deafening silence of support.
No Responses
Reading Time: [rt_reading_time postfix=”minutes” postfix_singular=”minute”]
UCI students ban the American flag? Not in my backyard, bucko!

This week, some crazy kids got a Publishers’ Clearing House-sized reality check after attempting a “liberal” flag ban; it came in the form of a veto, a media storm, and a deafening silence of support.

The student legislative counsel of the University of California at Irvine passed resolution to ban the showing of all flags in common areas.

“The American flag has been flown in instances of colonialism and imperialism.” [We believe that flags] “construct paradigms of conformity and sets homogenized standards.”

-Written by student Matthew Guevara of the school of social ecology.

This was not taken lightly and the five member executive oversight committee (aka the “grown ups”) vetoed the student government’s decision and began damage control.

All’s well that end’s well, right?  Well not so fast.  I believe that knee-jerk anti-liberalism has raised its head. It seems a bit ironic that the symbol of our freedom is more important than the actual freedom. Remember that even burning the flag was defended by the Supreme Court as protected speech?  In this instance, the student government was attempting to ban all nationalistic symbols but the media maelstrom made it seem like a rejection of only the Stars and Stripes.

I don’t agree with this short-lived ban. I drive by UCI daily and my first reaction was “NIMBY!” (not in my backyard). But I still admire their moxie and their efforts have raised our consciousness.

In defense of their thesis, the US does keep military personnel in 150 nations around the world. I think the point these non-representative representatives were trying to make is that maybe flags and patriotism are a deterrent to world peace and why not just take a break from dividing and conquering ourselves in a community of learning and idealism? Imagine there’s no countries
It isn’t hard to do
Nothing to kill or die for
And no religion, too

Imagine all the people
Living life in peace

Sadly yet not surprisingly, I couldn’t find an iota of support for this student resolution from an informal internet search. Words like “misguided, idiotic, liberal” were common.  I’m not saying we aren’t a country worth fighting for but I would ask whether our most significant threats aren’t domestic?  With US boots in the ground in 150 countries, satellites and drones everywhere, and a body politic willing to support any and all use of force followed by any and all use of rationalizations, it would seem that our government has also perceived that our greatest future threats are domestic as well.

Many have observed that the National Guards, local police forces, and even campus police are receiving military training and equipment according to this USA Today story.

There is no such thing as a “loyal opposition” during times of war.  It appears that perpetual war is our core ideology and greatest export going forward unless and until young people decide to rebel. So far, with the Occupy Wall Street movement aside, the Millennial generation hasn’t shown the moxy of the Baby Boomers so an echo of the kind of conflicts at Kent State and Reagan’s repression of Berkeley Students is not likely to ensue.  Based on this week’s events, the most important thing our student’s will ever learn in University is helplessness. And perhaps the lesson of Occupy Wall Street and this failed flag ban is just that sort of learned helplessness.

So I suppose the students should just be glad they haven’t been lined up and shot like in Tienanmen Square.  For now, they have just been ridiculed, maligned, and patronized for imagining a world without countries.  I think the best thing would have been to have the students demand that their representatives change their positions – but that would be too much like democracy- and grown-ups in charge apparently had no faith in that process. In a perhaps related note, I stumbled into a UCI professor’s lecture this week in the beautiful Newport Beach Public Library about “Sunni vs. Shia”. The professor I heard was, to coin the Fox News tagline, ‘fair and balanced’, intellectual, precise and unemotional. In contrast, the audience of Über conservative and affluent listeners could have been staff writers for “Fox News”.  To hear the anti-Islamic vitriol phrased in the form of questions was sad but the professors dignity in the face of it gave me hope.

It made me realize one thing: intellectual freedom is not an oxymoron; it is the cornerstone of political freedom.

A PODCAST was made from this lecture and I will post the link when it becomes available.