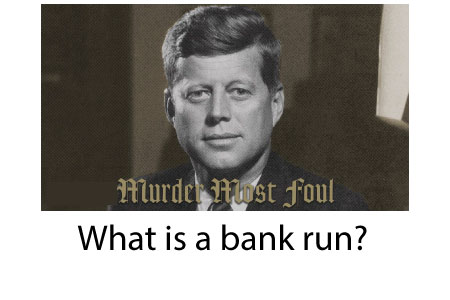 It's been 57 yrs since the Kennedy murder and yet Trump hasn't declassified the files. Is there something happening that is not being reported?
7 Responses
Reading Time: 5 minutes
What is a bank run?

I listen to all kinds of media and I learn the least from mainstream media because the ethos of journalism is dead- they are just talking heads that aspire to be rich and famous and do not even do their own homework. If you don’t believe there is total control of messaging from a central source, please watch this one minute video and give me an alternative explanation. There are many videos like this out there.

Even though I don’t agree with everything said by the independent voices who espouse “conspiracy theories”, I do find authenticity and actual things that I didn’t know. And interestingly, their facts almost always check out.

In these times of extreme fear, so much has changed that it would be hard to list them all. While we were all distracted by the Coronavirus death counts, here are some of the historic actions that were taken during the March Madness. As they say, follow the money or “cui bono” (who benefits?)

Think of our economy as a Las Vegas resort. If there is no one gambling or coming to the resort (consumers and tax payers), then there is no income. Just like everyone else, the economy requires the flow of money through the system to pay salaries, benefits, equipment loans, utilities, and service it’s debts. In the case of the Coronavirus cessation of the economy, everyone who can will go to cash and anyone that can’t, will default.

The truth of all fractional reserve banking is that it is not capable of surviving this simultaneous stoppage of activity because the money isn’t there and the loans go bad at the same time. Just like in the movie, It’s a Wonderful Life, when everyone gets scared and runs on the bank, any depositors during a run will find that the bank doesn’t just keep a 1:1 ratio of money saved and money lent. For every 1 dollar in savings, they are allowed to leverage that into 10 dollars of loans.

So what happens in a bank run? The bank can’t pay, it declares Chapter 11 bankruptcy, and the depositors get mad – but they are only insured up to $200,000 per person per institution by the FDIC so a bank failure is good for business in three ways: they get a “bail in” from all the depositors who potentially lost everything above $200,000. Secondly, the post-bankruptcy bank can reissue stock and dilute their old bond and shareholders. Finally, the government, which temporarily bought the failing mortgage-backed securities at 100 cents on the dollar will sell the assets back to the post-bankrupt banks for 30 cents or so, with the net result being another 2008-2009 situation where the banking system ends up owning the middle class homes (and businesses this time).

Like it or not, the entire system of credit is built around debt servicing that couldn’t possible be good in the event of a simultaneous economic cessation. The entire notion of a Federal Reserve Debt note is a convenient fiction since the money supply is infinitely elastic. The US Government used to owe about 22 Trillion but during March Madness, this may have increased many trillions more. During Obama’s eight years, the total debt went from 8 to 20 trillion. Remember the TARP? Well that was “only” $700 billion officially to preserve the big banks and auto industries.

The kind of power that is needed to bail out failing industries was made semi-permanent so they wouldn’t have to beg politicians again; we are seeing the result of that in the FED actions above and the CARES legislation which is 3X the size of TARP.

So who benefits from this CARES (Coronavirus Aid, Relief, and Economic Security Act)?

There is $4 Trillion to authorize the FED to use SPV (special purchase vehicles) and other actions to prop up the markets that I mentioned above without any transparency or oversight.

The article above cites some of the other “pork barrel” items included:

Essentially, the entire financial system is backstopped from the top, not from the bottom. In other words, people can lose their homes again, but the lending institutions won’t be hurt.

It would seem that since there is a bit of a bank run that gold should be in demand. You can’t buy it but the price hasn’t shot up. That is because the futures markets can be manipulated to discredit the idea of gold as sound money. Interestingly, you can’t purchase a gun in some municipalities during the lockdowns. Alarmists are fond of saying we are going to be like Italy but I hope that is not the case. There have been reports of hungry mobs looting grocery stores there.

For those who believe anything is worth it to stop the Coronavirus “pandemic”, you should think about the limitations of government can do and where their apparent priorities lie. We are living through a massive redistribution of wealth and if it persists, the already decimated middle class, now with no 401Ks and their homes foreclosed upon will likely be even more prone to radical political populism than before.

I end with some timely Kennedy trivia from the last week. There was $25M for the Kennedy Center in the CARES bill but they still furloughed their employees. Caroline Kennedy just resigned from the board at the Kennedy School of Public Policy at Harvard. The Kennedy grandkids posted a video of them singing “Timber” Bob Dylan just released a song about JFK’s assassination called “murder, most foul”.

Some have suggested that John Kennedy made enemies in the intelligence “deep state” and that his executive order to issue silver certificates may have been viewed as a threat. It would appear that as a result of, or perhaps under the cover of, the Coronavirus crisis, the government is reevaluating its partnership with the Federal Reserve Bank, joining together to “federalize” a lot of debt, at least in the short term.

It remains to be seen who or what power interests win the upper hand in this reorganization but we do live in interesting times when CEOs and politicians voluntarily resign in record numbers. Can they all want to spend more time with the family? Is there something else going on under the surface that we don’t know about? It’s been 57 yrs since the Kennedy murder and yet Trump hasn’t declassified the files. Is there something happening that is not being reported?  I’m just a doctor but since so many people have broadened their expertise to include pandemic modeling, I thought I would put on the old tin foil hat and see how it fits.