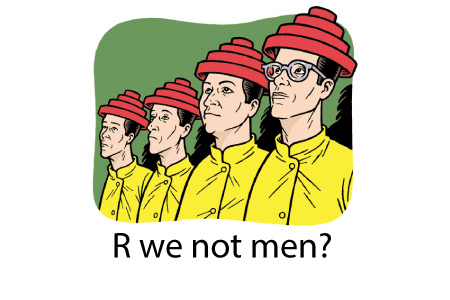 Just as some devoutly religious people dislike atheists, I dislike a-humanists.
No Responses
Reading Time: 3 minutes
What’s worse than an atheist? An ahumanist! So I was playing this puzzle solving video game called The Talos Principle, in which you play as robot while interactive computer elements in this virtualized world mess with you in the roles of JHWH and Satan.  It uses a Socratic method to really rattle your sense of what being human is.

Here’s the first screenshot that exemplifies this deeply philosophical game that makes you feel like an idiot defending the uniqueness of human consciousness: The Satan character asked me if it switched one of my neurons to machine, then why do I still feel my human consciousness is special and not purely from matter?

I had an epiphany when shortly thereafter when I watched a video by a consciousness researcher who compared going to research conferences about human consciousness to going to Middle Earth Conventions.  He says the majority of his colleagues presume it exists but he does not.

This researcher, my video game, and my recent interviews with Transhumanists Liz Parrish and Zoltan Istvan led to a deep seated existential nausea that made me realize that just as some devoutly religious people dislike atheists, I have to confess that I dislike a-humanists.

All at once, I felt as if I understood my fear and loathing of the Singularity crowd and Transhumanists who welcome a day when Artificial intelligence is comingled or even holds dominion over mankind.  They are race traitors! Perhaps one day, my low opinion of those who would discount the uniqueness of human consciousness and the primacy of our intact survival will be rendered moot by progress.  My love for cyberpunk lit has led me to challenge the assumptions but I never really considered the possibility that there may not be anything special about being a human being.

If that is the case and the future holds equal rights for sentient robots, I can’t help but feel that we won’t survive but according to some Singularity zealots and Transhumanists, that shouldn’t matter. If you find this depressing, then lighten up with this video by New Zealand folk-rock due, The Flight of the Conchords.

Read more about this coming conflict in this blog. I wrote a screenplay called “The Master” about Edward Dudley Brown, a slave who became a winning jockey, trainer, and owner during American Reconstruction,  while battling racism.  In my research, I was impressed that Kentucky and Tennessee gave rise to the Ku Klux Klan and that those people felt terrorizing sympathetic whites was integral to their strategy as well.

Perhaps one day, my mistrust of race traitors who welcome AI will seem as backward and ignorant as a Ku Klux Klan member.  Perhaps.  But if I have to draw a line between us and them, it won’t be along racial lines but rather carbon/silicon ones.

If you are a writer or a history buff and would like to read my screenplay and offer notes I would greatly appreciate it!  Please download it here.