I had an interesting conversation yesterday with my patient Arthur, who is 76 years old and taking TA-65, 6 capsules nightly, for three years.  We received his telomere measurements which were supposed to help him decide whether the money was well-spent. What do you think? 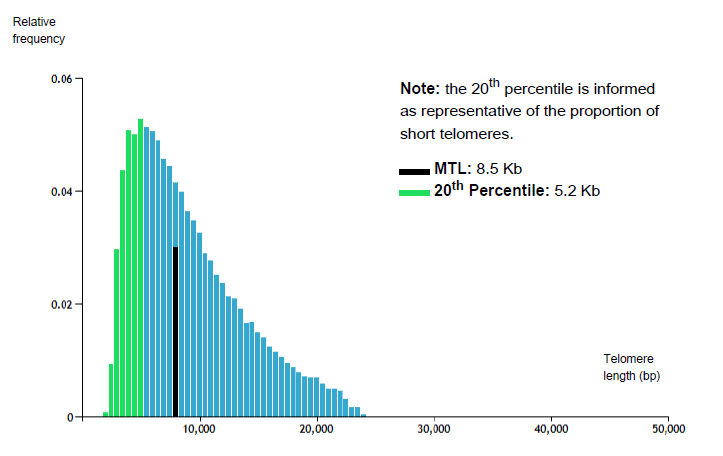 On the one hand, his median telomere length for this test was low at 8,500 base pairs but he only had 1% critically-short (<3,000 base pairs).  By way of background, he started with non-alcoholic, non-viral cirrhosis of the liver, pre-diabetes and borderline hypertension. We don’t have any comparison to know what the change was.

In the last three years, his liver disease has been stable, he has not had progression of diabetes or hypertension, and he walks 45 minutes a day.

The first obvious issue is that we don’t know his telomeres before starting so is this an improvement?

The second issue is that we don’t know what parallel-universe Arthur would have been like without telomerase activation. Would he be diabetic, with high blood pressure meds and on a liver transplant list?

I would guess that his telomere length would have been LONGER three years ago because there would have been many stem cells in crisis with lengthening but damaged chromosomes.  But I believe his percentage of critically-shortened telomeres would have been higher (typically in the teens).

This is because I believe that telomerase activation helps stem cells with damage to die off, leading to a healthier representation with the overgrown and eroded telomeres typical of cells in crisis being killed off with their host or rebalanced or regrown.

So the key to taking advantage of telomerase activation is to start early.  If you are both preserving good and killing off damaged stem cells, you may get a very narrow distribution like Arthur as shown above because there are fewer cell lines available. But if you preserve and kill off damaged stem cells in a twenty-year old, then there is a lot more reserve to take advantage of.

In other words, Arthur may only have 20% of his stem cell reserve still alive whereas at the age of twenty, he might still have 80% left to preserve.

Someone asked me after watching my video about telomeres as a biomarker what would be the best area of research for someone interested in telomerase activation medicine.  I replied the study of clonality because my suspicion is that telomerase activation is a double-edge sword not only preserving what’s good but also destroying what’s bad. That is the notion of clonality that I blogged about here.

So I advised Arthur to take a some time off of TA-65 and see how he feels. If he doesn’t feel well, then restart it and compare.  As unscientific as that might sound, it is hard to be objective about our subjective wellness until we have something to compare it to.

If I were Arthur and I decided that I felt better taking it, I would continue and then repeat a telomere evaluation in a year.  The fact is that feeling better or much the same at 76, in the face of a serious medical condition like chronic liver failure, cannot be taken for granted.

Compare Arthur’s result with 76-yo Karl’s results below and you see a wider distribution of lengths. But what is important is that for both men, the percentage of critically-shortened telomeres is in the low single digits (Karl’s was previously in the high twenties).  In the end, it is your percentage of critically-short telomeres that determines mutation and the narrowing and shortening of the histogram may indicate a decrease in clonal representation or a more healthy stem cell population; we just can’t know what the relative contributions of those two processes are without being able to identify clonality (pedigrees) and bone marrow reserve (the amount of gas left in the tank). 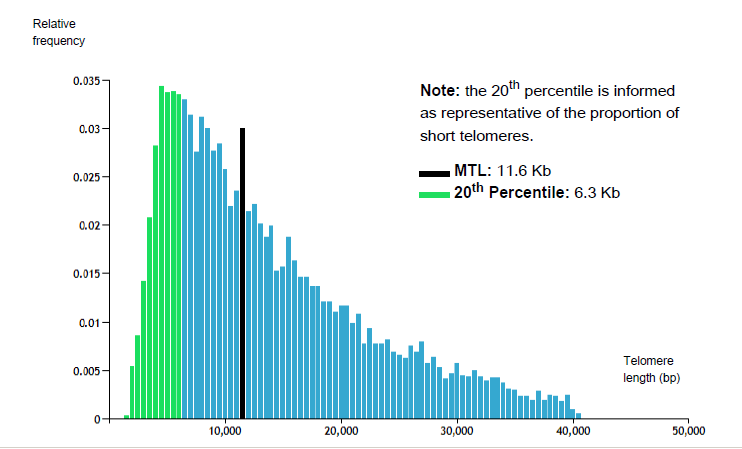 To watch the video I did called “Telomeres: The Ultimate Biomarker” click below:

2 thoughts on “Which 76-yo telomeres would you rather have?”