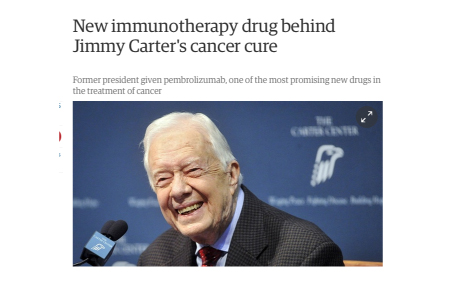 Just to be clear, the drug didn't cure President Carter, the drug simply allowed his own immune system to kill the cancer, which is what it was designed to do.
No Responses
Reading Time: [rt_reading_time postfix=”minutes” postfix_singular=”minute”]
Jimmy Carter cured himself of metastatic melanoma – but Merck and the FDA did help

The great news this week is about President Jimmy Carter being cured of melanoma that had metastasized to his brain.  The drug he used is called Keytruda (or Pembrolizumab). I will briefly explain what this all means.

Firstly, this kind of medication is actually a monoclonal antibody (so it ends in ‘ab’) and are from an emerging new class of “drugs” known as biologics.

The monoclonal signifies that it is one key to a lock, if you will.  The lock in this case is the PD-L1 receptor which is a signaling molecule used to shut down or cause apoptosis (PD=programmed death) of natural cytotoxic “killer”  T-Cells that normally fight cancer.  Mice are engineered to produce this antibody and then it is “humanized” and administered. So the antibodies target the available PD-1 receptors like a kitten in styrofoam, then the signal to die or undergo apoptosis is blocked, allowing the cytotoxics cops to mobilize and naturally fight the infections/cancer of our body.

Just to be clear, the drug didn’t cure President Carter, the drug simply allowed his own immune system to kill the cancer, which is what it was designed to do.

The invaders and cancers signal the PD-1 system, like a clever enemy employing a double agent from Marathon run back and tell Athens that Persia had in fact WON the battle and to surrender keys to Athens to the Persian fleet.  The ability to block the PD-1 cell receptors disallows this unilateral disarmament of the cell-based immune system.

As promising as this might seem, it is really just a better firetruck for a problem that has its roots with conception: aging of our immune system in general and of the melanocytic stem cells in this instance.

Just today, I spoke with a patient who was concerned about some bad press about TA-65 causing cancer, and I replied that in the eight years of taking it, I haven’t shown and obvious cancer, which elicited a chuckle (predictably).

This was not meant to be a joke.  People think cancer is a one time thing, like nuclear war, when there is ample evidence to suggest that we are constantly making, destroying, and surviving damaged cancer cells throughout our lives. Think of it like petty crime when we are young, terrorists when we are old, and then full nuclear combat when we have the acquired immune deficiency of old age.

Even if my baseline rate of cancer formation was higher that normal, if my immune function was even proportionally higher, then no clinical evidence of that would take hold unless I had an extremely early detection bias and then subject myself to the collaterally damaging fear, chemotherapy, and radiation involved in becoming a “cancer patient”. When you study my cancer pyramid from a more profound, root cause, you would do better to preserve your immune system in its agile, naive state because as a locksmith goes through his blank keys, we also tend to lose T-Cell adaptive capacity as we grow older. The same holds true for all stem cells in all organs which can make cancer.

The engine of cancer is telomere erosion. The engineer is the p53 watchman than hits the brakes of the train.  The Natural Killer (both Natural Killers and Cytotoxic T-cells) are the Supermen who can stop the speeding train.

This antibody treatment is simply allowing the runaway train to be slowed by the would-be superheroes.  Traditional cancer thinking has been aimed at the pyramid above the ground so this is progress of sorts.

I salute the FDA for fast tracking this new antibody for patient use in just one year.  But it is still an intervention aimed at putting out, not preventing fires and depends wholly upon an intact and functioning host immune system.  It is your body that is curing the cancer but stopping the cancer’s “hack”.  There is nothing inherently cancer-destructive about this new “medication”; it is merely allowing the cure to come from your own immune system.

Telomere erosion is a potential cause of genetic mutation in ALL cell types and that is why it is implicated in its formation of all diseases including all the cancers. To understand my entire theory of aging and disease, read my book from which these illustrations are taken, Telomere Timebombs: Defusing the Terror of Aging.