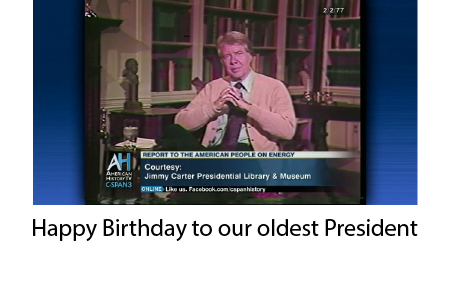 Today, President Carter became the oldest president our nation has ever had, unseating the title from the former CIA director, George Bush. This is remarkable especially because just two years ago, Carter had metastatic melanoma throughout his brain that was cured by an antibody drug called Keytruda. Read this blog to understand more.

I want to wish my favorite president a happy birthday and attempt three things: to explain his emergence, understand his negative image among so many, and attempt to rehabilitate that image. In a nutshell, Carter was never trying to be a cowboy like John Wayne… he was trying to be a Gary Cooper.

Carter was always a self-effacing and plain-spoken man despite having achieved a great deal as a businessman and politician. He was a peanut farmer, then a state senator, then governor, then a dark horse politician and nominee for the 1976 Democratic ticket. In the wake of the Watergate scandal and the Vietnam era, America yearned for a politician with a demeanor of Jimmy Stewart rather than the Jimmy Cagney one of “tricky Dick”. As a Southern Baptist, he managed to walk the walk and talk the talk and was a trailblazer for affirmative action and against racial discrimination in the deep south.

Once Carter became president, he brought his morality to the office and he and his national security advisor, Zbigniew Brzezinski, attempted to bolster human rights and dissidents in places like Poland and Czechoslovakia. An unfortunate consequence of this attempt to tie human rights to US support was of course, the grassroots Iranian Revolution, which deposed the oppressive CIA-installed Shah who had ruled for twenty-six years.

Carter is remembered as being the man who was mocked for “lusting in his heart”. How quaint that seems when compared with the actual literal philandering we have reports of from nearly every other president!

He was also mocked for urging Americans to turn down the thermostats and wear sweaters during the OPEC-induced oil shortages and price increases. Ironically, nowadays, people take limiting fossil fuel consumption very seriously.

Carter was also at the helm when the Soviets invaded Afghanistan, which led to the support of the CIA-backed Mujaheddin warriors in “the database” like Osama bin Laden, who used TOW surface-to-air missiles and guerrilla warfare to exact a heavy toll and eventual retreat of the Soviets from their land.

In the minds of many Americans, Carter was too weak and his replacement, Reagan, seemed to be a total reversal of the pendulum from pacifist to stalwart Cold Warrior.

History may judge Carter differently than the American electorate however when we consider that the hand of Henry Kissinger, who had delayed the end of the Vietnam War in 1968 to help Nixon get elected, was also at work in delaying the release of the US hostages in Tehran to help Reagan get elected. Didn’t it seem a bit odd that they were released minutes after Reagan’s inauguration?

Of course, the best rehabilitation of Carter’s image has been the result of the man himself. Unlike giving six-figure speeches to bankers and Russians like Obama and Clinton, Carter busies himself with building homes and overseeing elections. He has always been a decent and moral person and it is an aberration of American politics that such a grassroots superstar could emerge to lead the nation led. In fact, this glitch was what led to the superdelegate system of 1981. A candidate like Bernie Sanders was made impossible because those Democratic National Committee reforms, under the pretext of strengthening the party from populists, was adopted after losing in a landslide to Reagan.

Once upon a time, a Jimmy Stewart-like man who had clear and noble intentions managed to get through the system that typically selects candidates who have clear deep state bona fides and backing. In this age of leaders groomed by king makers, Carter was a president and a man that was too good for the office.

Perhaps his longevity teaches us something. To live a long and healthy life, you must be spiritual, do good works, be able to laugh at yourself, and eat well and exercise. So let’s all wish a happy birthday to one of greatest presidents, living or deceased. Many Americans resent his weak image but his support of dissidents during the inevitable implosion of the authoritarian and non-competitive Soviet empire, helped to accelerate its decline. War mongers who coddle dictators and who stage regime change coups are the rule; Carter was the exception to all the Guatemalas, Bay of Pigs, Arab Springs, Gulf Wars, and other deep state mischief.

To many people, Jimmy Carter was a a joke. Saturday Night Live derided him constantly. But is his demeanor really a “beta male” behavior or actually a Frank Capra like hero standing tall for what he believes without caving to the military-industrial-beltway kleptocrats? In the words of the song of Nick Lowe in 1974 (pre-Carter) and then covered by 1978 Elvis Costello (during Carter), “What’s so funny ’bout peace, love and understanding?”

Now that we are being fed perpetual war, hate, and ignorance…we should stop and appreciate that James Earl Carter Jr. actually represents the best kind of alpha male and leader that our country could produce. He is true social justice warrior that only serves to remind us that those words once had a gravitas and a moral purpose above the inane “intersectional” identity politics of the modern progressive movement. For more criticism of the modern progressives, the natural descendants of the fallen Nazi and Soviet authoritarian utopian movements, read this blog.