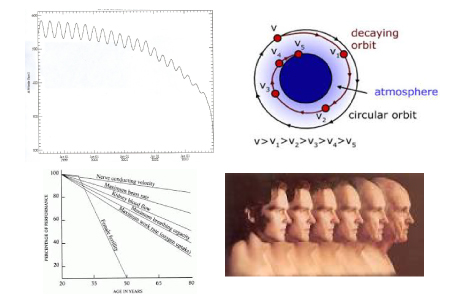 I am extremely grateful to be able to tell you that the FTC contacted my lawyers and informed them that I would be dropped from the suit against TA Sciences
2 Responses
Reading Time: 4 minutes
Satellites! How orbits and humans decay…

I am extremely grateful to be able to tell you that the FTC contacted my lawyers and informed them that I would be dropped from the suit against TA Sciences, the makers of the nutraceutical telomerase activator, TA-65.

Thanks to you, my supporters, I had the heart and the resources to raise a legal defense fund twice, hire attorneys, and prevent my freedom of speech from being influenced.

I have to thank Jon B, a longtime follower of my blogs and videos, who gave such sage advice and promised undying financial backing. I want to thank Syd Oldberg for writing to the FTC and donating both times I asked. I also wish to thank Paul Brocker, Hunter Blair, and Jane Goldberg for their amazing letters written to the FTC that I am sure had an impact.

Perhaps my biggest thanks goes to Deb Castleman, the wife of 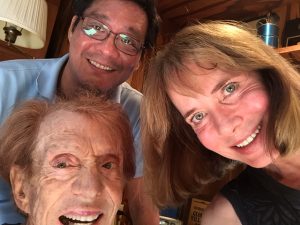 Harold Rosen and a dear friend and sage advisor who sat me down in their Santa Monica home and encouraged me to have the courage of my convictions. Her experience in the State Department, corporations, philanthropy, and life served to remind me that bureaucracies are made of of people and that I, as an American, have rights that worth protecting.

Deborah said if they could go after a doctor writing a blog, who would be next? I am deeply indebted to her not only for her generous contribution but for the moral support she gave me.

During my two hour visit, she and Harold regaled me with stories 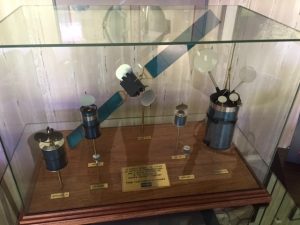 about the development of the geosynchronous satellite, which Harold Rosen created while working at Hughes. 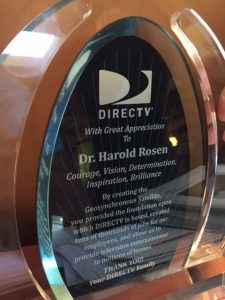 We got to talk about group think in the scientific climate change camp, conspiracy theories as an altered world view forged in childhood trauma, and the cult of personality around mavens such as Steve Jobs and Elon Musk, whom they both knew personally.

As we prepare for the Brazil Olympics to be broadcast, we take for granted that we experience it in almost real time due through a common cell phone streaming via geosynchronous satellites and the internet. But when the Syncom satellites showed the world the Tokyo Olympics in 1964, it was a miracle of modern technology. 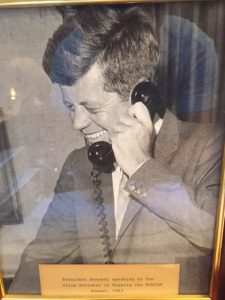 Look at the delight on President Kennedy’s face as he holds a satellite conversation with the Prime Minister of Nigeria via Harold’s Syncom satellite in August, 1963.

We got into a very interesting conversation about satellites that my mind is trying to relate to the question of immortality. Harold and Deb explained that the biggest challenge to maintaining a geostationary orbit over the equator, from which the communicator can communicate with half the planet, is the consumption of fuel needed to maintain orbital station-keeping. Because of air resistance, solar radiation, tidal effects, and orbital gravitational decay from a non-homogenous , the satellite must constantly expend tiny amounts of fuel and

Perhaps the best analogy to human aging would be the consumption of the immune system as represented by the non-senescent T-cell fraction. My patients not only receive telomere testing but we also offer special immune senescence testing. When a surface marker known as CD28 is absent from the cytotoxic T-Cells, we know that cell is no longer naive and able to attack a specific new target, like a cancer or virus.

The process of aging of the immune system can be understood as two problems- first is depletion of the reserve of T-Cells and a second is the decline in normal functioning which may result from genetic, and epigenetic factors, including having already “taught” the T-Cells to attack a specific target. They are like blank keys when they still have CD28 and cut keys after losing the CD28 markers.

In general, the older you get, the higher the percentage of dysfunctional, CD28 negative T-Cells we encounter.

If my theory about a stem cell theory of aging is correct, then immune aging, like all aging and disease, may be principally the result of telomere shortening, mutation known as non-homologous end joining, and subsequent dysfunction and depletion.

If you don’t think my theory about telomere erosion in stem cells being at the heart of all disease is sound, then just compare it to this final paragraph from Wikipedia about hematopoetic stem cells.

The sensitivity of haematopoietic stem cells to Lig4, DNA polymerase mu and NHEJ1 deficiency suggests that NHEJ is a key determinant of the ability of stem cells to maintain themselves against physiological stress over time Rossi et al found that endogenous DNA damage accumulates with age even in wild type HSCs, and suggested that DNA damage accrual may be an important physiological mechanism of stem cell aging.

It is actually possible that the biggest problem in immortality engineering is that the cross-population of stem cells loses efficiency due to accumulated errors, not so much depletion. The reason for the Redenbacher Effect is data reproduction error. The reason for aging is a depletion of pristine stem cells and an inefficiency of error detection and apoptosis.

In honor of satellites, Deb, Harold, and a notion that we can all keep our immortal orbits from decaying, please enjoy this video from my favorite composer-singer, Ricki Lee Jones:

We were born forever
Tunneled into the fugitive night
Friends should stay together
Code the world with the fugitive light
Oh, I just saw you walking
Ice was reading fortunes by the moonlight
Casting runes on the rooftops and alleys
You’ll never read more than you will tonight

So you keep talking in many languages
Telling us the way you feel
Don’t stop, I’ll know the road you’re on
Don’t quit, you’re walking Satellites

2 thoughts on “Satellites! How orbits and humans decay…”