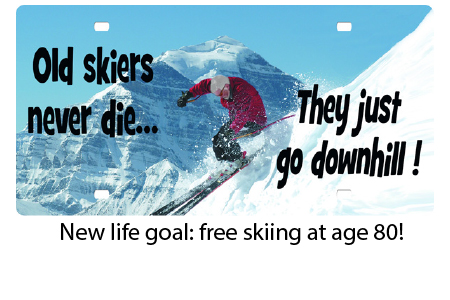 Yesterday, I returned from a 5-day trip to Mammoth Mountain for some skiing,  snowboarding, and work. I am currently working on a 9 part video series about exosomes. I want to explain what this mountain trip taught me about life and aging.

My friend, a fellow 51-yo, wanted to learn to ski so I agreed. While driving up, she asked me: “why do you like skiing?” I thought about it and replied “good memories, beautiful scenery, exercise, and an exhilaration of going freeway speeds while being ever so slightly out of control yet in control.”

My friend, a former skater, did extremely well and was linking her turns and well in control. But she didn’t want to continue because didn’t see the benefit of living with the fear of falling and had nothing to prove to herself.

This made me reflect upon my own risk/reward assessment and the relationship of aging. As I rode the lifts up, I spoke with many strangers and the reactions were varied with regard to risk, reward, and aging. The man still in his 20s said he stopped snowboarding the parks because of some nasty falls. The man in his 60s said he didn’t feel skiing was that dangerous despite his outward appearance of obesity and looking very close to a cardiac incident.

Then there is me. I took up snowboarding about seven years ago and while I do fine when on piste, I fall often when getting off the lift. On day two of snowboarding, I fell, cartoon-character-on-banana-peel-style on my occiput and sacrum. Despite the whiplash, I just took 10 capsules of Recharge and was able to ski and snowboard three more days without problems.

Five years ago, I blogged about my achilles injury. I recall thinking perhaps the adaptogens were making my achilles worse but actually they were the cure.

I don’t know if the exosomes that I injected helped but I did notice that my achilles didn’t act up nor did my old meniscal tear in my knee. My shoulder, which I also injured snowboarding two years ago, is also better since my exosome injection.

At night, I was thinking about aging and skiing so I watched a video of a 101-yo skier below. I suppose the lesson here is that from cradle to grave, in both love and leisure, we are negotiating with our desire to enjoy, caution over getting injured, and our physical abilities and reserve. My new life goal is to get virtually free skiing season passes. Some resorts use 65, others 70, but most allow seniors older than 80 to ski for next to nothing!

One of the skiers in his 60s remarked quite rightly that the bones and muscles do well but the ligaments, tendons, and cartilage do not. Another 60-yo skier said you “use it or lose it” but it really isn’t that simple, is it? People age, the tendons, ligaments, and cartilage become less flexible, slower to regenerate, and injured with incomplete repair.

Things brings us to the whole problem with beliefs about aging. One of the stupidest theories of aging is the idea that people loss ability because they stop trying. Obviously, the passionate skiers don’t stop trying; their bodies become less able to comply. The other silly delusion we all share to some degree is that heredity and lifestyle play huge roles in aging. They mainly do so in a negative fashion. Plenty of people have good genes and lifestyle and they still get old. Maybe their decay is less, but they decay.

It is time to understand that aging is not significantly ameliorated by being “good”. If you want to know what really causes aging and the proven ways it can be accelerated or reversed, watch this lecture. If you want to understand and keep your lifestyle maximally helping, then read my book, The Telomere Miracle.

I am pleased to announce that I am now accepting appointments for exosome injections. This is based on seven weeks of improvements in both me and mom and no untoward symptoms. For Mother’s day this Sunday, I am going to get another intranasal injection from mom and she will also get another intranasal dose. Her arthritis is improved, he blood pressure is lower, and we both are looking and feeling younger.

If you are interested in being one of the early adopters, please email me to be on the interest list. If you are not on this list, you will not receive much of the clinical anecdotes that I will be sharing with my growing list of 65 interested people and keeping out of the sight of the general public and the FTC.

Early adopters will be getting the lowest pricing, well below current market rates, and if things go as I believe they will, the schedule will fill and the price will need to go up as I am only one person who can be in one place at one time. No matter what you pay, you will always get the best comprehensive medical care that I can give.

SCIENTIFIC BASIS: There is a vast scientific literature on the role of Mesenchymal Stem Cells and their role in replacing damaged cells of many types, regulating the immune system away from inflammation and autoimmunity, and coordinating cell and tissue regeneration.

Anecdotal clinical evidence of people taking MSCs for a variety of conditions is encouraging. It is clear that cellular treatments are not, and will not be FDA-approved nor “standard of care” for the foreseeable future.

Since aging appears to involved a combination of inflammation, autoimmunity, and failed regeneration, the MSC-derived exosomes from an “adult” (i.e. not embryonic pluripotent) umbilical cord source may provide many of the benefits of MSCs without the potential problems of a genetically distinct donor graft cells that contain different cell surface histocompatibility antigens.

POTENTIAL RISKS: Exosomes are subject to quality control in manufacturing, consistency of composition, and accuracy of testing for infectious agents. A frozen chain of custody is kept by the manufacturer and by Dr. Park.

Clinically, the changes associated with remodeling and regeneration of the cells using MSC-derived exosome signaling can be profound and immediate. These are listed on the separate consent form that I signed. The list is neither comprehensive nor can it predict what my own unique reactions may be, highlighting the importance of efficient, honest, and prompt communications between myself and Dr. Park.

In theory, existing cancer cells can be stimulated by MSC-derived exosomes. Because there is no scientific basis, animal model evidence, nor human clinical evidence for this, it remains only theoretical. Furthermore, the origination from a healthy fetal placenta would make the pro-cancerous role of exosomes unlikely.

FUTURE NEED FOR INJECTIONS: Just as cleaning your car doesn’t keep it clean forever, one time regeneration of cells will not prevent future damage. Maintenance with telomerase activation and removal of damaged old cells (i.e. senolysis) are also important aspects to reversing the effects of aging and frailty.

PATIENT PHYSICIAN RELATIONSHIP: I understand that open and honest communication about my medical history, expectations, and ongoing symptoms are all critical for an effective physician-patient relationship. Because my physiology can differ from another patient’s, I accept the responsibility of being aware of my body, continuing my ongoing relationships with other providers, and reporting any and all concerns, changes, and symptoms to Dr. Park.

ALTERNATIVES: I understand that I am free to do nothing at all. I also can receive “off-the-shelf” foreign MSCs or autologously derived MSCs. This involves risk of graft-versus-host in the former case and a liposuction and/or bone marrow biopsy in the latter case.

NO GUARANTEES: I understand this is a voluntary decision and that there is no guarantee of efficacy, benefit, or even safety. I understand that aging and illness are a natural progression of living. I have been given every opportunity to ask questions and these were answered to my satisfaction after voluntarily signing this consent.