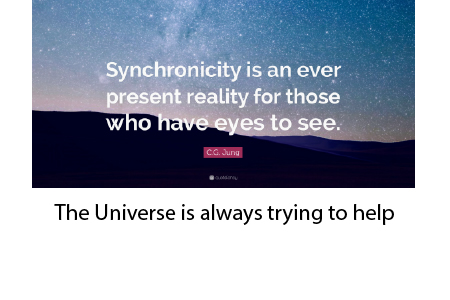 Yesterday, I had a very surreal experience when I attended my friend's conference, attended by over 5,000 real estate agents
No Responses
Reading Time: 3 minutes
Synchronicity is always knocking

Yesterday, I had a very surreal experience when I attended my friend’s conference, attended by over 5,000 real estate agents. I was trying to learn how to market myself and I have great respect for his teachings as I watch them on social media. As the host was speaking, I recognized that he was relating the time we went golfing and I introduced him to my college classmate who turned him onto online videos which would help propel his business. I later learned from an attendee that he had heard that story many times before as part of the standard “origin story”.

So I decided to walk up in the middle of the session and say “hi” to my friend as we had an awkward sort of conversation in front of 5,000 live and many more virtual participants. I didn’t have an elevator pitch about what I was doing but I did mention he was featured in one of my first videos on addictions. In it, he talks about not needing caffeine after taking TA-65, which is a pretty common symptom. At the 37 minute mark, one his his star realtors who was addicted to Ambien tells us how she was able to kick after a short time of taking TA-65. You can watch the video below.

I have known Tom for 16 years. Our children were born the same day and our wives were friends. If it weren’t for his wife, my children wouldn’t have attended the school that they did and I recall trick-or-treating with him and the kids perhaps 12 years ago when he was unsure about starting his now tremendously successful and impactful coaching empire.

The take-home lesson I want to impart is two-fold. I always suspect that luck and synchronicity increase while taking adaptogens. The truth is that we are constantly surrounded by countless individuals with whom we share a lot and who are provided by the universe to help us along the journey. I am quite certain that my friend would have discovered social media video without golfing with me, but it is interesting how I happened to be the one to make that introduction.

The second lesson is an explanation for luck and synchronicity. In fact, my friend is so focused, ambitious, and of a self-mastery/growth mindset that nothing would have kept him from succeeding on a grand scale. The more I live the more I appreciate how many opportunities are constantly being presented to us and how lucky we are to have them. The trick to “getting lucky” is to empty our minds of all the future hopes and past regrets and live in the moment. Adaptogens, by virtue of increasing lokahi or balance, encourage that because people sleep better, have more presence and focus, and generally go with the flow. I’ll give you an example of NOT going with the flow. Tom and I used to golf together with a group of guys and on one outing with our friend, despite not having hit a golf ball for two years, I made a hole-in-one on the fly on the same hole that I made one with a one-hop five years earlier. Because of financial stresses, I decided not to celebrate with the traditional buying a round of drinks. Afterwards, we played in a skins game where about 50 guys tee off on the same hole and play the same hole together while doing as much unruly and drunken heckling as possible. Wives, physical shortcomings, and obscenities are all par for the course. Instead of basking in my glory and spending a few hundred bucks, I decided to save the money and bury the incident. That was a poor decision and one that would have made for a great story and enhanced visibility of my personal brand. Talk about not giving in to luck and synchronicity! Well…live and learn and laugh along the way. There will other golf miracles and opportunities to market to 10,000 people I’m sure. The universe has always been good to me as I’m sure it has been to you. You just have to be awake enough to let it unfold.