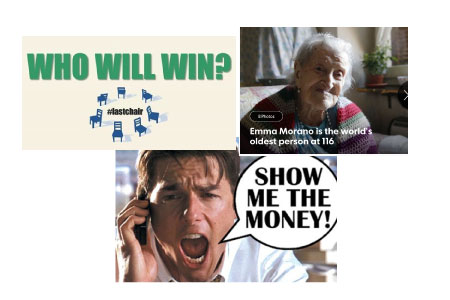 Sadly, our pioneers in human health and longevity have charted a course to oblivion for humanity. They aim to cure aging and cancer despite ignoring common sense and first principles
1 Responses
Reading Time: 3 minutes
We have a “winner”- only one person left born in the 1800s

Yesterday, the oldest living person, Susannah Jones (117), passed away in NY leaving just one person who was born in the 1800s who is still alive. One in 7.4 billion. 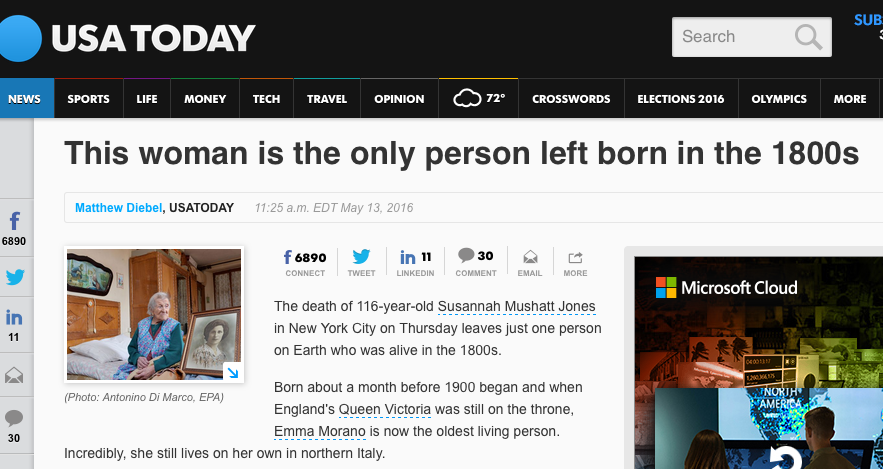 Unfortunately, this woman has no more to teach us than the kid who won musical chairs yesterday in kindergarten in Glendale Elementary School in Nashville, TN. 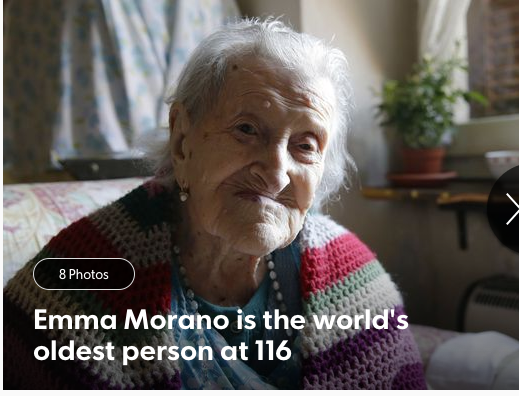 By definition, someone has to be last in musical chairs and that is because the game is set up that way. With her poor health, she probably doesn’t feel like a winner.  Someone had to be last, and now she ‘wins’; I hardly think so.  If she looked and acted like a 20yo, then I would say we should study her closely.

I heard an NPR show a couple of days ago on longevity which made me physically ill. The discourse on the topic of longevity is on par with what saintly relics are best to cure the pox or what types of bloodletting best treats consumption.

Particularly ironic is a nonagenarian who called in to offer his health tips on how to stay forever young.  He touted exercise and diet and the commentator said “you seem to be doing fine.”  The haughty man replied “other than being blind, I think I’m doing well.”

Here is the truth: in order to stay young and healthy, we should study the stem cell ecology of young and healthy people.  If you want to maintain a car in top condition, you don’t go to a junk yard and try to find cures for rust, metal fatigue, and denaturization of rubber.

Sadly, our captains of human health and longevity have charted the HMS BOUNTY to study the breadfuit plant and the rest of the crew can just go suck on a lime. 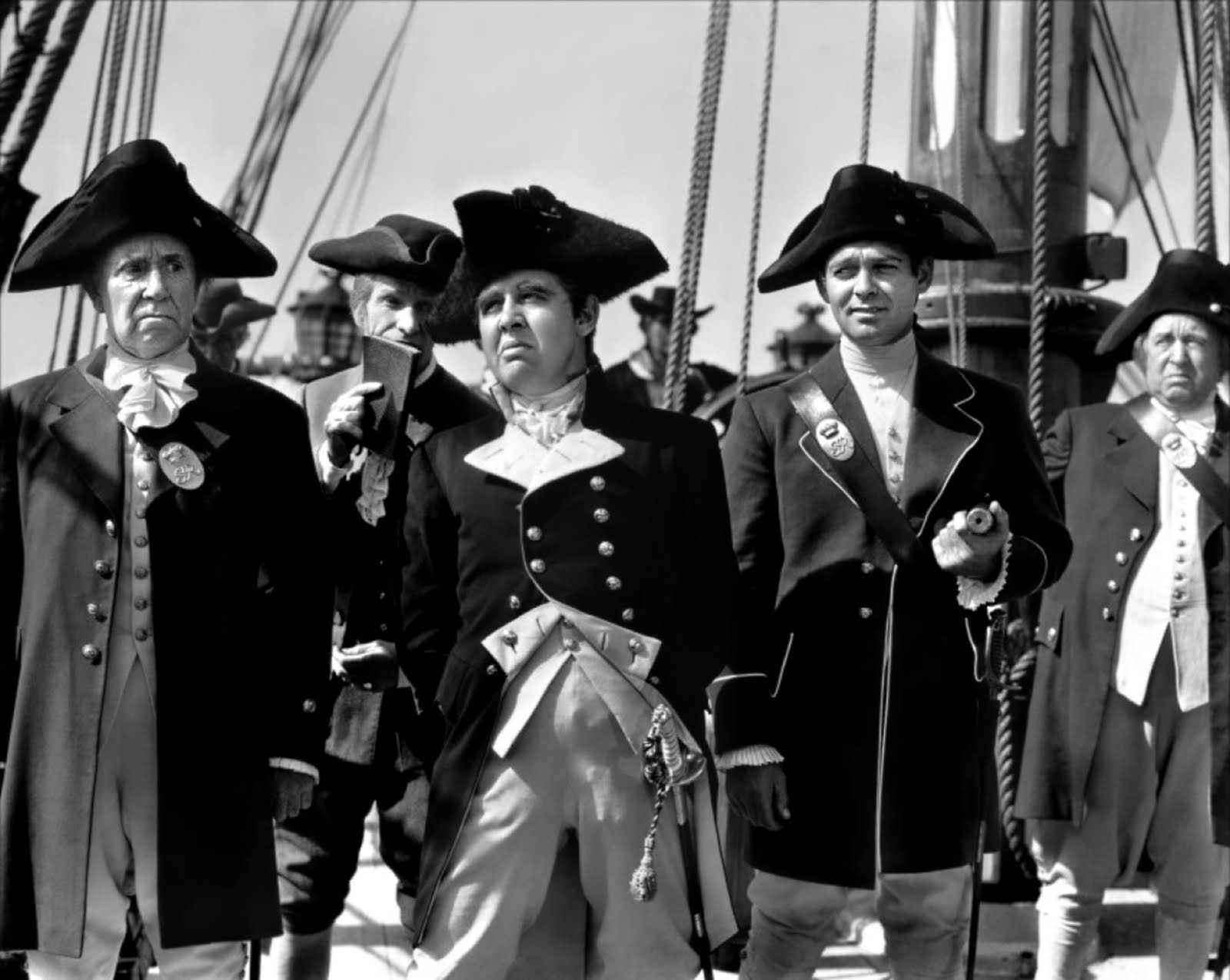 They aim to cure aging and cancer despite ignoring common sense and first principles. We have a many models for premature aging and they all implicate DNA integrity problems.  The system is designed around stem cells.  Hence, keep your stem cells healthy by activating telomerase like all the other successful organisms do, like Naked Mole rats, lobsters, and Bristlecone Pines.  Read my book, Telomere Timebombs: Defusing the Terror of Aging to understand my STEM CELL THEORY OF AGING

But sadly, people use a “sourcing heuristic” for truth which assumes WEALTH= CREDIBILITY.  Does Bill Gates have an opinion on which one-hit-wonder band of the 70s is the greatest?  He must be right. 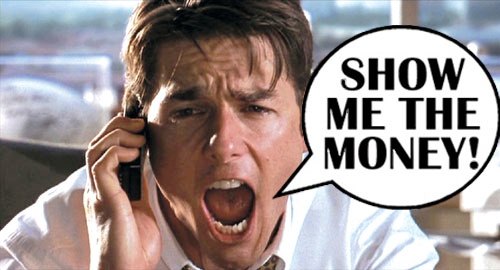 Who are the hottest rock stars attracting capital that that is fleeing other asset classes?
Craig Venter, of Human Longevity Inc, now Patrick Soong Shiang with his NantHealth venture against cancer.

Maybe you can fool all the people all the time after all?  Follow the money, right over the cliff. The War on Aging is a war on truth but then again, the first casualty of war is always the truth.

I had the pleasure of knowing Soledad Mexia, who was 114 when she passed. Her doctor didn’t allow her to take TA-65 except for a few months and her family was uncomfortable going against the physician’s wishes. She regrew hundreds of jet black hairs after just a few months and kept them for 2 years.  That should mean something, right? Maybe worthy of investigation?  Not if you can’t monetize it…  The name of the game is musical chairs and ‘riding the gravy train’.  Welcome to the machine. 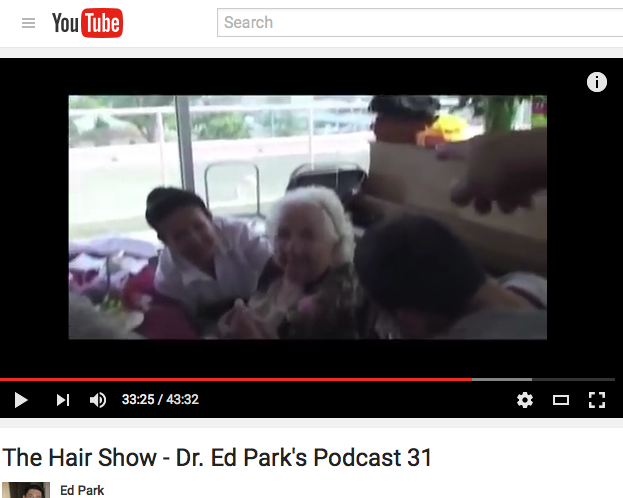