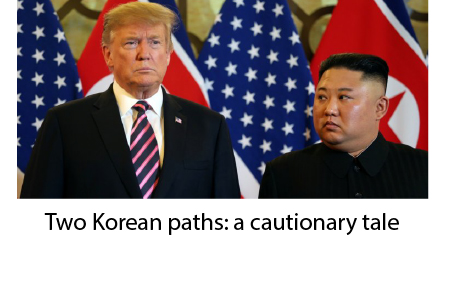 Koreans, like everyone else, are the product of the stories that they tell and the wisdom that they garner and pass down to their children
No Responses
Reading Time: 7 minutes
What is the deal with Koreans?

Yesterday, history was made as an American President set foot in North Korea. So many people have a jaundiced view of Trump (no puns intended) but I think it is instructive to consider Korean exceptionalism in the south versus Korean exceptionalism in the north. One is accomplished and active whereas the other is stifled and repressed. As we invite technofascism to encroach upon our own personal liberty and as the population becomes more dumbed down by education and propaganda, it would behoove us to look at a tale of two Koreas.

But first, I would like to take a moment to explain Koreans to you from my very limited perspective as a Korean who was born in Canada and spent just one summer there. Koreans are not like other Asians in many respects; allow me to explain why they do so well in some endeavors like academics, golf, poker, and now even pitching. Tonight, I was inspired to blog when I heard that South Korean Dodgers’ pitcher, Hyun Jin Ryu, was named as the National League’s All Star starting pitcher. He has been a surprise ace for a squad that nearly won the World Series last year but more amazing he came back from career-ending injuries in last season and continues to be the best pitcher in baseball with 9 wins on an ERA of 1.83, and racking up 94 strike outs with only 7 walks. For those that enjoy baseball, I refer you to this article. It might seem odd to realize that the current reigning world poker champion is a Korean-American, John Cyin, from the midwest who defeated the second largest field in history of 7,874 players and survived a 199 hand one-on-one duel to win. Now consider that 11 of the top 20 women’s golfers in the world are of Korean descent: You might think these are just an odd coincidences but you would be wrong. Excellence in professional sports is not only a function of physical abilities but of effort. Pitcher Hyun Jin Ryu is the the athletic exception that proves the rule and I’m sure there are more physically gifted but that no one works harder at studying the batters of the opposing teams than he does. Only in areas where sheer effort trumps raw ability do Koreans stand out. As any golfer will tell you, there is only one person on the team and one person to blame (excepting the caddy) when you don’t do well.

But that is just how Koreans like it. They may not be the strongest, smartest, or most gifted, but no one that is likely to work harder and that is why endeavors that reward mastery like poker and golf attract the very ambitious spirits of these people. If I asked you which country has the most PhDs per capita in the world, you should already know the answer: Now before you think I am advancing some theory of Korean superiority, I want you to consider that North Korea, with its genetically identical people, is one of the most impoverished, backwards, and repressive countries in the world. There are no smart phones or international pop stars like BTS coming out of North Korea: So what is it about culture and historical circumstance that make South Koreans so unusual?

My apologies to people of Chinese and Japanese descent for the sweeping generalizations that I am about to make but I would argue that Koreans, who share the Confucian culture of Chinese and Japanese, differ because they lie squarely in the middle both geographically and culturally. The Chinese have a strong sense of individualism yet tend to be passive when it comes to tolerating oppression. The Japanese culture is openly hostile attitude towards individualism and their culture is entirely premised upon doing what is best for the community; you could argue that they welcome oppression as a group norm. In contrast, Koreans tend to be very personally ambitious and yet the language and the culture also foster ideals of respect, hierarchy, and duty. My experiences witnessing the pro-democracy reform riots of 1987 taught me that Koreans do not suffer in silence as well as their neighbors and this continues to the recent ouster of President Park Guen Hye for corruption. I suggest to you that a Chinese (or American) might pay someone to assassinate a villain whereas the Japanese villain would kill themselves; but the Korean might do the deed himself and face the consequences as in the famous case of the director of the Korean C.I.A., Kim Jae Gyu, who took it upon himself to assassinate the longstanding dictator, Park Chung Hee (the father of the aforementioned Park Guen hye)

And there you have it: Koreans are very proud, individualistic, and yet moralistic in their sense of civic justice.

But let’s take a bit deeper dive into what forged this character and statistically aberrant “success” culture.

My parents were both born in Imperial Japan, in North Korea. The Japanese empire ruled Korea from 1910 until 1945 when the nation was divided between cold war adversaries. My father’s most comfortable language was Japanese because that was the only thing taught in schools. Both my parents were born with Japanese names. The children under Imperial rule were raised to believe Japan was a superior culture and if Japan had not lost the second world war, Koreans would have been certainly relegated to being second class citizens with a slow erasure of language, history, and identity.

As fate would have it, the division of Korea between the Soviet Union and the United States led to the devastating Korean War in which so many people died and the entire north was treated to the Dresden/Hiroshima civilian targeting by the US war machine. It is no wonder that unlike Vietnam, where the brutal war caused unbelievable suffering yet the aftermath brought cultural interchange between the former adversaries, the 66-year history of one-party propaganda without an alternative narrative has resulted in a deep mistrust of the United States.

You might have started reading this blog by wondering if I think Korean people are exceptional in any way. My reply would be no. North Koreans are the product of a repressive dictatorship and their achievements can not even begin to aspire to mediocrity on any kind of world stage. I believe the only reason South Koreans have excelled is because of a strange circumstance of adversity. As the saying goes: “shirtsleeves to shirtsleeves in three generations” and it is explained below.

Adversity and hard work are why Koreans excelled in their post-war circumstances. When you factor in Confucianism, industrialization, IMF World Bank monetary rescue, and global transmigration, you get more of the picture. But Koreans, like everyone else, are the product of the stories that they tell and the wisdom that they garner and pass down to their children. If we teach our children that hard work pays off and provide them with the opportunities to compete and excel under a minimum of discrimination, then have a chance at attaining their goals.  These are the same stories of the Irish potato famine immigrants, the Jewish pogrom immigrants, and the Latin American, African, and Asian immigrants. As I think of how I was raised, I realize that the “superpowers” that I inherited from my parents had nothing to do with Korean-ness as they would have liked to believe but rather had everything to do with learning the value of responsibility and dedication.

I was talking to my friend whose Korean father, like my parents, grew up seeing people killed in war, friends and family struggling to survive, and went to sleep hungry nightly. When he watched his children and grandchildren eat, he would just grin with joy because he grew up hungry both figuratively and literally. As we raise our children in this time and land of great abundance, it would serve them well to remind them that their overall living conditions are not only the best in history, but close to the best in the world and that although they can claim none of the credit, they will bear the responsibility of protecting it from enemies, both foreign and domestic, who would barter their freedoms and prosperity for short term gain. It is a platitude but far from a truism that “the arc of history bends towards justice“. Ask the people who died in Tienanmen Square or the protestors in Hong Kong. Ask the people who live in Pyoungyang or Flint. I would say the more apt aphorism is the “the price of freedom is eternal vigilance.” I would argue that South Korean exceptionalism is a momentary aberration built upon a brief window of achievement based upon adversity and opportunity. An equally possible scenario for humanity is the model of North Korean exceptionalism where power is concentrated in the hands of a few and the masses are coerced into submission through scarcity, intimidation, and constant surveillance.

The Three Generation Cycle- from www.familylinevideo.com

The First Generation comes from a life of hardship and is determined to have a better future. They are willing to work hard and to make the sacrifices necessary in order to achieve their goal. By their later years, their efforts pay off; they are able to enjoy the fruits of their labor, often with assets to pass on.

Their children, the Second Generation, grow up a witness to their parent’s struggle and understand the importance of hard work. Although they live a more comfortable lifestyle, they may still remember a childhood filled with frugality. Because of this awareness, they make financial and educational choices that help them build upon the foundation their parents worked so hard to create. By their later years, the second generation has acquired even greater wealth.

The Third Generation, however, has no memory of want or struggle. They only know a life of plenty and often lack an understanding for the work that went into building the lifestyle they now enjoy. It is this third generation that has become known to simply squander the wealth their parents and grandparents worked so hard to build.