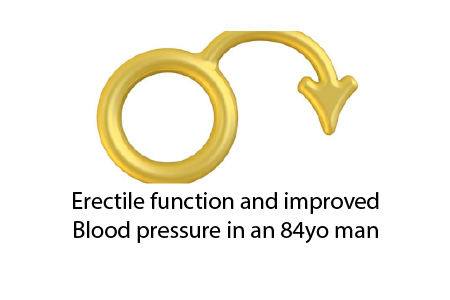 Last week, I was pleased to see my patient of six and a half years, Vincent, who has been taking 4 TA-65 capsules nightly since the age of 77. He doesn’t use his cardiovascular system as much as 78-yo Doug (who runs up and down mountains), but he has had a remarkable improvement in his pulse pressure, arterial resistance, and even his small vessels (as evidenced by his erectile function).

The collagen producing cells of skin and arteries seem to do well on adaptogens. His skin elasticity went from 40% to 65% in the last 6 1/2 yrs. Before TA-65. his PULSE PRESSURE (the measured difference between systolic (top number) and diastolic (bottom number)) was a very respectable 41mmHg. Last week, we measured it as only 35mmHg, which corresponds to the range for a 25-yo! You must understand that there is a direct and predictable widening of pulse pressure with “normal” aging as described in this blog.

At 84, Vincent will walks/runs a mile a day, still drives, and actively manages his apartment buildings. He is now taking his blood pressure medicine, Felodipine, every OTHER day instead of daily. He takes resveratrol and a NAD compound as well.  At this year’s appointment, he and said something interesting: he still has sexual relations twice a week and ejaculates once every two weeks at the most. That is a Chinese thing, by the way. The subject of loss of the life force of jing by ejaculation in traditional Chinese Medicine can be summed up easily- if you expend semen, you age prematurely and lose health.

Why do men lose erectile function as they age? Like everything, the quality of stem cells and the regular cells they produce is at the heart of the matter. Specifically, the hormone producing cells of the gonads are important. And finally, the small vessels controlling the penile chambers of the corpora cavernosae are important, especially the arteries.

In Vincent’s age and risk cohort (men with hypertension) the chance of having such an active sex life is very small. See this chart showing the prevalence of erectile dysfunction from this study: What escapes most people is that hypertension, erectile dysfunction, and degradation of stem cell quality all share the same cause: telomere erosion and resultant genotypic and phenotypic degradation. The erection is made possible by autonomic nervous system which prompts dilation of penile arteries. Increased pressure compresses penile veins and the blood goes in but has trouble getting out, creating a sustained erection. The health of the arterial cells, known as endothelial cells, determines their ability to generate the vasodilating molecule, nitric oxide. That temporary increase in nitric oxide production is what makes erectile dysfunction drugs effective.

To learn more about male sexual function and hear some TA-65 anecdotes, watch this podcast that I made on the subject: