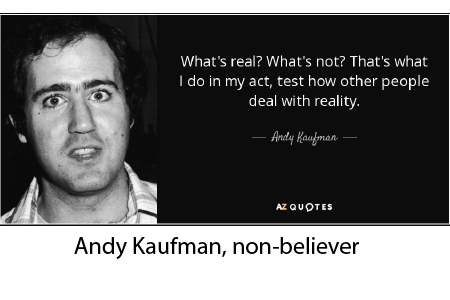 The impeding declassification of the JFK assassination files makes me think of Andy Kaufman, the R.E.M. Song, "Man on the Moon", and Kaufman's exploration of the nature of belief and gullibility.
2 Responses
Reading Time: 4 minutes
Andy Kaufman- dead or alive, he still shines a mirror on our naïveté

This evening, I was reading about how in less than a month, the JFK assassination files will be released (25 years after the 1992 Congressional Act authorizing it) and that only the president can prevent this. JFK’s 100th birthday was 9/27/2017.

This made me think of Andy Kaufman, the R.E.M. Song, “Man on the Moon” and Kaufman’s exploration of the nature of belief and gullibility. 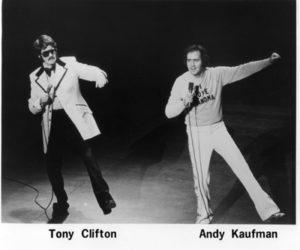 I seem to recall, although I can find no evidence of this biographical detail, that Andy Kaufman was very close to his grandmother. In fact, a posthumous work released in 2013 was entitled “Andy and his Grandmother”.  At any rate, the heart-wrenching decryption key of this comedic genius’ soul was this indelibly tragic story that I cannot seem to corroborate.

As I recall the story that has now, as if by Mandela Effect, disappeared from available internet sources, Kaufman was very close to his grandmother, even buying her a TV with remote with his first earnings as a child entertainer. When she died, his parents thought it best that they tell young Andy she moved away (like the proverbial family dog going upstate to a farm).

The reason this story stuck with me was that it seemed to explain the deep anger, cynicism, and mocking of the audience’s credulity in so many of his characters. Imagine realizing that Santa Claus may not be 100% real. Now imagine coming to the slow realization that your grammy isn’t just avoiding you, she is dead and your parents lied to you about it.

I recall at my motorcycle rider training course speaking with an Egyptian classmate about my cancelled trip to Egypt and how I found it odd that a Facebook acquaintance had warned me there would be a revolution at the time of our planned visit. And there was! So I asked my classmate how that man could have known, and he replied, “my friend, we will only ever know about 10% of what really happens and why it happens and that takes many decades. The rest, we will never know.”

This brings us back full circle to JFK, the man who put the men on the moon (unless you believe it was really director Stanley Kubrick). Can you imagine that what occurs in the release of these documents three weeks hence will be the truth, the whole truth, and nothing but the truth?

Here are some of the lyrics from the R.E.M. song scored for the Milos Foreman biopic about Andy Kaufman, both entitled Man on the Moon

(The first stanza sets the tone of performance art and games, the make-believe. The Game of Life was a popular board game, along with Monopoly, Twenty-one, checkers, chess, Twister, and Risk. Finally the song suggests the act of living virtuously to get into heaven is also a game. Mott the Hoople was a glam rock bank famous for a song by David Bowie called “All the Young Dudes” (in which the first lines is about ending one’s life early. “My Breakfast with Blassie” was a Kaufman’s short film, riffing off the title of the 70s cult movie, “My Dinner with Andre”.)

Now, Andy did you hear about this one?
Tell me, are you locked in the punch?
Andy are you goofing on Elvis? Hey, baby
Are we losing touch?

(Kaufman was famous for his faux wrestling villain and smarmy Elvis impersonator characters. The stanza asks if Andy has heard the latest joke/farce/hoax and then book ends it with another question: “are we losing touch?”)

(The deeply cynical suggestion, echoing the grandma moved upstate leitmotif of Kaufman’s dark humor, is that if you believe everything you hear on the main stream media, then you should be very afraid, indeed. If you believe it is largely fake, then it’s cool.)

(Religious mythology versus tricksterism (see this Rick and Morty reference about making snakes appear). History of Science told as a fable. Political assassination by Octavian Augustus against Cleopatra as suicide. Another dig on the mythology of science?)

We all have things we believe in. They help us. But I would caution anyone who believes in false dichotomies like truth and lies. Andy Kaufman warned us that the Punch and Judy Show is staged by someone, after all. The stories we tell, from our origins, our parents’ imagined virtues and shortcomings, and even our own identities are based on axioms that can’t be proven from outside the system. We all live in the make-believe games and performance art of reality, eternally at the mercy of Göedel’s Incompleteness Theorem.

2 thoughts on “Andy Kaufman- dead or alive, he still shines a mirror on our naïveté”