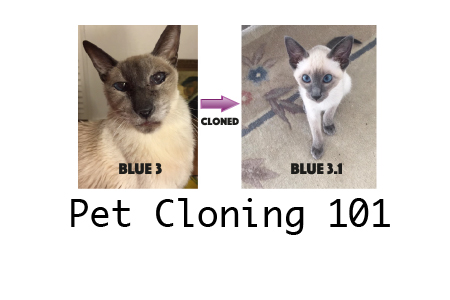 Since 1960, Charles has owned a Siamese cat named "Blue". The first three cats were good for over fifty years of companionship but this fourth "Blue" is an actual clone of Blue #3.
2 Responses
Reading Time: [rt_reading_time postfix=”minutes” postfix_singular=”minute”]
His cat came back – as a clone!

My patients are quite interesting. This week, I had follow-up consult with Charles, who first came to me at age 81 and is now 86. This is his third visit and although he showed some improvements in his lung capacity and arterial resistance in the second year, this decade has been a challenge and his biomarkers have deteriorated a bit. I will report his telomere and immune senescence results when I get them. He came back with the hopes of using tests to justify the last five years of taking of TA-65 (and cycloastrogenol). Although most of his contemporaries have passed away or are unhealthy, I often marvel at how often octogenarians complain that they feel the same. I have never had a patient tell me that they know its working because they feel the same. Objectively, he takes no blood pressure medicines, although perhaps he could benefit from them. He suffers from glaucoma but for the most part is quite active, still an avid reader and learner, drives, and even pilots his glider plane.

One thing that we got into this visit was that since 1960, Charles has owned a Siamese cat named “Blue”. The first three cats were good for over fifty years of companionship but this fourth “Blue” is an actual clone of Blue #3. It took many tries and the cost of a economy car, but according to Charles and the firm he worked with, it worked. The cat came back! So I thought we should talk about cloning for the blog…

The notion of taking the chromosomes from one creature and transplanting them into a host egg to form a clone is an old one, written about in 1932 by Sir Aldous Huxley in Brave New World.  The first successful cloning that we became aware of was in Scotland in 1996: Dolly was a sheep who died prematurely with short telomeres and was the only success in 277 attempts. It turns out that depending on which organ you take DNA from, you might get a younger life expectancy; this is likely correlated largely with the known differences in telomere length throughout the body’s various tissues.

Since clones form Dolly have had normal life expectancy, this indicates that genetic “age” is mostly epigenetic and telomere related, not genomic. So what is it that made Dolly born old? Telomeres were short so the fuses were half-burned and didn’t get the reset that normally occurs from sexual reproduction.

Seen from a higher order of understanding, the relatively trivial problem of telomere age is known to be overcome by induced pluripotency, which is the Nobel Prize-winning discovery of making embryonic-like stem cell from a ordinary differentiated ones by introducing three genes or even their proteins, known as Yamagata factors. This proves that like a pinball machine, a clone can be reset with young telomeres.

So we have a more interesting question: what accounts for the difference between 98% of failures and the low 2% success of pets like Blue 3.1?

Instead of DNA integrity or even telomere length, initial failures to clone probably have to do with the epigenetics of the genome. It turns out that one of the more successful hacks for successful cloning been to enhance something called acetylation, which is a modification to the spool-like binding proteins called histones. Acetylation renders the genome accessible. When deacetlated, it is like the pages of the books are glued shut. By inhibiting deacetylation, Dr. Wakayama of Kobe, Japan, allowed the pages to be read, and has cloned 581 mice in 25 generations from a single original animal.

If we understand and control the states of acetylation, methylation (allow gene silencing), phosphorylation, sumoylation, and ubiquitylation of the histones, we could better control the way the symphony of the genome is conducted.

In truth, the manifestations of youth, cell differentiation, aging, and dysfunction probably have little to do with chromosomes in most cases where it counts- the germline and stem cells. We may possess and be able to read the score for a symphony (the genetic code) but we shouldn’t kid ourselves into believing that we have understood the music. In truth, the music needs to be interpreted by musicians, musical instruments, and performed live, just as the genome needs to be “played” by cells,  cell differentiation, and epigenetic expression.

Speaking of clones who were born young, that is what identical twins are. Watch this podcast to understand a little more about the hopelessly vague and broad field we call epigenetics (everything outside of the simple DNA sequences that were described decades ago).