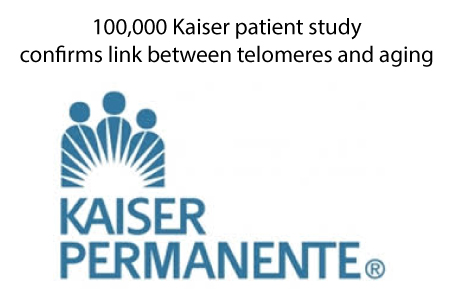 In long-awaited and landmark study published yesterday in Genetics, Lapham and 28 other authors collaborated to report telomere length in a cohort of Kaiser patients who gave saliva samples.
No Responses
Reading Time: 2 minutes
Landmark Kaiser study of 100,000 patients confirms telomeres decline with age

In long-awaited and landmark study published yesterday in Genetics, Lapham and 28 other authors collaborated to report telomere length in a cohort of Kaiser patients who gave saliva samples.  They will be mining and publishing from this data for a while but an important aspect of this is the attention to test standardization and controls which are important given the errors inherent in the standard quantitative PCR methods.

Essentially, this graph summarizes the study’s findings: for both genders (although more for men), telomeres from the saliva-derived white blood cells in the Kaiser patients shortened with age but began to increase after age 75 when examined as a whole: 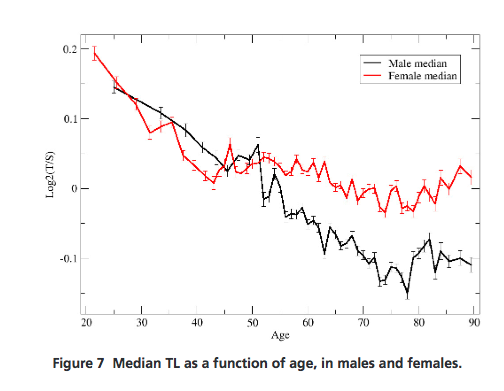 If there is something that could regrow telomeres, such as TA-65, then it might be worth your while to consider this unless you are 100% certain that the risk is too great or that this decline is not related to the negative consequences of aging as my stem cell theory of aging and disease suggests.

Regarding the upwards inflection after 75, I can think of several explanations which are all probably contributing:

2) The stem cells of people over 75 are in crisis known as senescence and are unable to kill themselves, leading to lengthening and hypervariability (like the hair on an old street person).

3) There are few viable replacements left so the niches are populated by damaged stem cells which uncontrollably lengthen their telomeres as above.

4) The majority of cells continue to shorten their telomeres but the stubborn and hard-to-kill senescent types have increased sampling representation by virtue of their telomerase activity and longer lives.

Given the mountain of evidence linking mortality to shortened telomeres, the expressed written consent of captive members to have their blood and saliva tested for research purposes, and the fiduciary duty of underwriters to consider risk stratification, will there be any protection from ‘cherry-picking’ and denial of coverage based on telomere measurements?

Telomere measurement may prove much more reliable for prognostic risk-stratification than single nucleotide polymorphisms, cholesterol tests, and perhaps even diabetes and blood pressure monitoring, which they are already trying to manage with bribes, apps, shaming, and rate hikes.

Welcome to the machine!  Thankfully, the highest goal of health maintenance organizations will be perpetual premium payments; so as long as there is inter-HMO poaching, no intramural dumping of higher risk individuals or draconian rate increases, the incentives are properly aligned to keep people healthy, paying premiums, and low resource-utilizing, even with the introduction of involuntary telomere risk profiling.