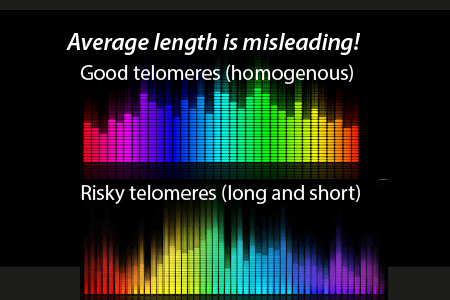 When we discuss the risk of telomere length to cancer risk, there are many studies but the conclusions we reach are limited by our simplistic assumptions.

On the one hand, the 2010 JAMA prospective study of 787 people showed shorter telomeres were associated with earlier and more severe telomere shortening.

On the other hand, a study published in the American Journal of Epidemiology of 28,000 people in the Singaporean Chinese Health Study showed an increase in cancer incidence with both shorter and longer telomere lengths; a whopping 4,000 of them got cancer in the 22-year study period.

How can we reconcile these two studies?

Firstly, we assume that leukocyte telomere length (from blood cells) is a useful measure of cancer risk. This may be true only because they hold the same progenitors of mesenchymal stem cells (MSC). In other words, MSC’s make the hematopoetic ones so that the chromosome mutations and telomere inheritenance patterns would follow a shared ancestor as described in this modified “Redenbacher Effect” post that I wrote.

What can we say for certain?

What else can we safely assume?

I hope the day is coming when adults can safely store their 25-yo copies and reliable thaw and replenish them. Right now, it’s like we are trying to destroy and maintain. But with the ability to restore good young copies, the problems of aging and bouncing back from serious disease will be more easily conquered.