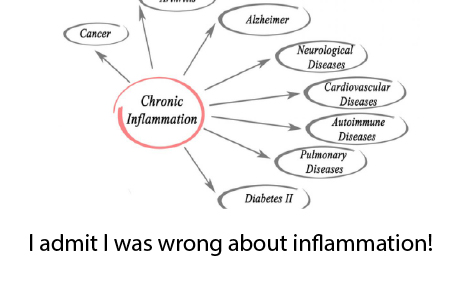 Previously, I didn't believe in inflammation causing aging because I didn't perceive any mechanism for that action
7 Responses
Reading Time: 4 minutes
Inflammation, autoimmunity, and aging

The other day while driving home with my son from San Francisco, my opinion suddenly shifted about inflammation. In the past, I have written and believed that inflammation was the result of aging, not it’s cause; now I understand how inflammation can be both via autoimmunity.

Before, I ascribed the oxidation species that pour out of senescent cells to cell suicide mediated by mitochondrial lysis triggered by cell suicide. This suicide is triggered by p53 when the chromosomes are incorrect in number as the result of telomere erosion and abnormal chromosome number. This is still 100% true as illustrated in this cartoon from my book, Telomere Timebombs. 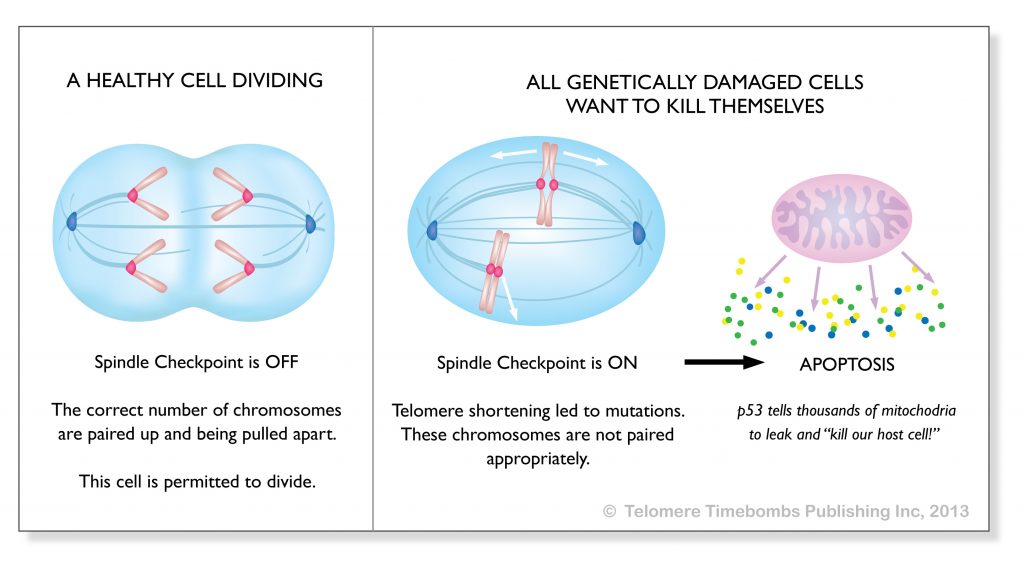 Driving home, I took a phone call from a long time reader of my blogs who told me “even you don’t recognize the importance of inflammation of aging.” He recommended that I look up Dr. Kevin Tracy and after watching the video below, I immediately understood something: there is a mechanism for anxiety causing autoimmune disease and it has to do with anxiety, lack of vagal nerve (parasympathetic) action on the spleen, and the overrelease of TNF (inflammatory cytokine) from macrophages in the spleen.

Dr. Tracy, using an animal model, found that stimulation of the vagus nerve (the relaxation response system) inhibited this inflammatory cascade. If you watch this video, you too will be convinced. So it seems that people who are stressed have increased inflammation and therefore trigger autoimmunity. This is a key to understanding not only the link between the nervous system and the immune system but how inflammation, autoimmunity, and even aging can accelerated in the presence of anxiety. 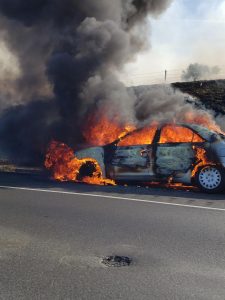 As soon as I finished watching this video, we saw smoke on the horizon. As we approached it, we saw a car fire and I took a picture as we passed by that was perfectly timed. I took it as a sign from the universe that inflammation, left uncontrolled, is important and that I have been ignoring its role.

What I am proposing is that fear, through impairing the relaxing effects of deep breathing, increases the sympathetic nervous system which is antagonistic to the parasympathetic system of the vagus nerve. Dr. Tracy explains that vagal nerve activity blunts the inflammatory response. If we are stressed, the vagus is relatively inactive and the spleen is producing too much TNF which can lead to autoimmunity. Autoimmunity will then engender more host tissue destruction and potentially more inflammation and autoimmunity. Notably, stress also decreases endocannabinoid activity and increases the stress hormone cortisol, which has a direct effect of inhibiting telomerase.

TNF blockers, as Dr. Tracy states, are big business and are used to control autoimmune diseases. But what if get the same effect from free and omnipresent natural relaxtion techniques that I describe in The Telomere Miracle?

I have been blogging about exosomes from MSCs a lot recently and this will continue. So what would the mechanism be for anti-aging? I encourage you to watch all seven videos by pioneer Dr. Arnold Caplan on the subject of mesenchymal stem cells (aka medicinal signaling cells).

He states that MSCs are trophic (they cause growth) and down-regulate inflammation mainly through actions on the immune system. In particular, they cause an increase in T regulatory cells which, as Dr. Caplan explains, allows immune cloaking but not complete evasion of graft versus host reactions and vice versa. T regulatory cells are anti-inflammatory and that is generally a good thing.

This brings us to how exosomes from MSCs could be working. MSCs excrete exosomes that promote reprogramming and alter gene expression via the molecules inside them. Exosomes from healthy young MSCs encourage cell and vessel reproduction. And importantly, they modulate the immune system away from activated TH1 cells to T regulatory and TH2 type cells, decreasing autoimmunity.

Our entire lives, our immune system strikes a balance between self-tolerance and self-destruction. During another serendipitous meeting in a bar at an anti-aging conference a few months ago, I was chatting with an oncology nurse. I asked her about the miracle of Keytruda, an antibody that blocks the blocking of the killer T cells. She said that she treats a lot of autoimmunity associated with that (like the thyroid and the colon). This table comes directly from the Keytruda website: 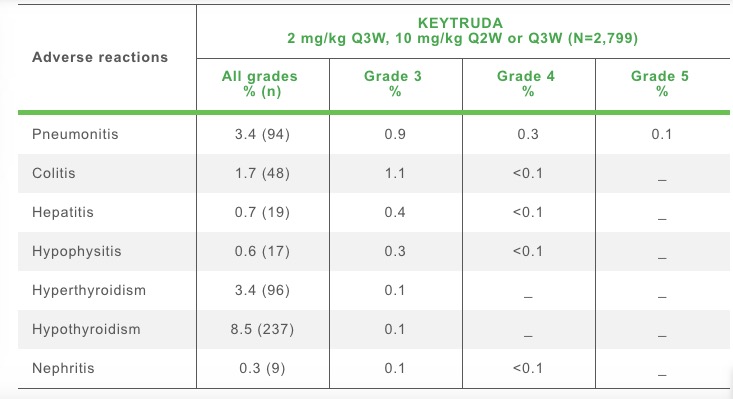 I believe that we get old because our immune systems allow our cells to persist in the SASP (senescence associated secretory phenotype). The system tolerates dysfunctional and old cells and that is part of why cancer increases as we age. Keytruda teaches us that if you allow for more self-destruction, there is an unintended consequence of autoimmunity.

It is probable that our cells become more and more divergent, the immune system is depleted, overly tolerant, and even overly exposed to cell damage that is not efficiently controlled by MSC immune dampening. If we lack normal healthy MSCs and their exosome signals, we don’t limit inflammation, we trigger more self-antigens to be released. This then causes more autoimmunity, and the immune system is further depleted and activated via the inflammation.

Before I received the phone call on the road trip and talked to the nurse in the bar, I didn’t have a way to reconcile autoimmunity, aging, inflammation, and stress. Now I have a theory as to how the six cylinders I discuss in The Telomere Miracle work holistically to keep the dampeners on our immune system and slow down the inflammatory engine of aging. It is my hope that using MSC-derived exosomes from the newborn placenta will be another may to decrease inflammation, autoimmunity, and aging.

Previously, I didn’t believe in inflammation causing aging because I didn’t perceive any mechanism for that action; now that I know the nervous system directly controls immunity and inflammation, it is all starting to make more sense. So remember to stay relaxed if you want to stay young. Laughter, breathing, gratitude, and sleep…all great ways to increase your parasympathetic tone and prevent inflammation.

7 thoughts on “Inflammation, autoimmunity, and aging”