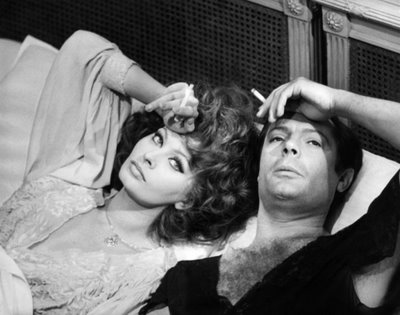 When you think about Marcello and Sophia, you don't think about suicide or counting the seconds - you think about sex, and passion, and the absurd joy of living
4 Responses
Reading Time: 5 minutes
Mastroianna, Monicelli, Sophia Loren, Neil deGrasse Tyson, Carl Sagan, & Hypatia

For #TheatricalThursday, I want to connect some dots in a sort of photo-montage ending with a clip from a movie I watched wast night.  It’s a rant, and I really do like Neil’s work, but it needs to be said…

Firstly , I am in Cannes for the 67th Film Festival this week:

The pervasive, central image of the festival, that can be seen “photo-bombing” me, is the iconic Marcello Mastroianna. Here it is closeup:

Marcello passed away 1996 at the age of 71.   He worked extensively with Italian writer/director, Mario Moiacelli, who was nominated for two Oscars and wrote over 111 movies.

I was sad but not surprised to learn that the director Monicelli killed himself at age 95 back in 2010.  Why?  Probably suffering and hopelessness that he associated with his prostate cancer.  Or maybe life had been sweet enough and he wanted to end on a high note (no pun intended from his method of leaping from a hospital room window). (Normally, that wouldn’t be funny yet but as a comedic director, I took license…)

Director Monicelli also worked extensively with Sophia Loren, who unlike her aforementioned collaborators, is still soaking up the Cannes sun and promoting her son’s movie. I was sad but not surprised to read her declaring the inevitable end to her career and life.

“”I’m starting to count the hours, count the seconds; everything is important when you reach my age. Every so often you have to explode back into life.”    – Sophia Loren

“we’re all going to die and life is shit, don’t you think? I bet science was invented to prove this”

We now downshift our Vespa of a blog into second and push it quickly while in neutral to jump start … (ah fond recollections of my own Vespa bring me back to next week’s Harvard College reunion…but I digress.)

To quote Miles Davis: “So what!?”   What is the disease that these three Italians all suffered from?  Telomere erosion in stem cells.  That is all. And now that is reversible.

And how does that disease manifest in our human condition?  By the common delusion that aging and life is unidirectional and inevitable.  This is a philosophy or rather a religion that the supposed enlightened amongst us now favor.  But it is childish and wrong and belies a world view that is daily disappearing in the rear view of our scooter.

The ‘modern enlightened man’ and his religion of science is currently being represented by the jovial and articulate Neil deGrasse Tyson. But his recent poo-pooing of philosophy makes us question his suitability to carry the blue mantle, or even wash the dusty feet of Carl Sagan:

In ancient times, philosophy and theology were one. The creation of the early Christian church borrows heavily from the Hellenistic logic of Late Antiquity. “Philo-sophia” is merely “love of wisdom” and that is a higher aspiration than anything, in my opinion.

We have to know that in classical times, education began with basis of the Trivium of grammar, logic, and rhetioric

Only when the student acquired those, could he ascend to study of the Quadrivium, the study of arithmattic, geometry, music, and astronomy.

And so only after those seven foundations were in place, could the student be permitted or even capable of comprehending the highest call to reason – that of metaphysics and the true, sacred, and eternal meaning of it all.  All deGrasse Tyson’s science were mere stepping stones and subsets to man’s highest field of knowledge – PHILOSOPHY.

These sad little technicians like deGrasse Tyson and Richard Dawkins are parroting something they naively believe is right and good:  that the beginning and end of all their endeavors must be atheistic, materialistic, and nihilistic. My only glimmer of hope comes from his inadvertent self-critique that came in this glib-ping-pong exchange of sophomoric banter:

Interviewer: Philosophy was a good major for comedy, I think, because it does get you to ask a lot of ridiculous questions about things.

Tyson: No, you need people to laugh at your ridiculous questions.

Tyson: Nihilism is a kind of philosophy.

I’m not alone in my critique of Neil’s simple mindedness.  Here is a valid critique of deGrasse Tyson’s sophomoric (of high school) musings about overpopulation and existential inertia from longevity:

Suffering through these baseless and inane proclamations is akin to having John Tesh teach a masterclass in the music of Thelonius Monk.  And how dare I?  Who the hell am I and what have I done to say these things about this great man of science. Well, I don’t have to. His supposed muse (another misunderstood term) was Carl Sagan, who revered the philosopher Hypatia and reviled the destruction of the Library of Alexandria:

In one of the final scenes, her Platonic friend and would-be lover, no less than the Prefect of Alexandria, beseeches her to accept Christianity or else be killed.  She cannot and when asked “then what do you believe in?”  She replies “Philosophy”.

Here is a scene from the movie where Hypatia finally understand why the ellipse and not the circle is the explanation for the movements of the planets in a heliocentric model:

With my telomere theory of aging, so obvious and yet unacknowledged, I feel much like she did in this scene. Hopefully, no deGrasse Tysons or death-worshiping Italians will try to dissuade me of my own theories and beliefs.